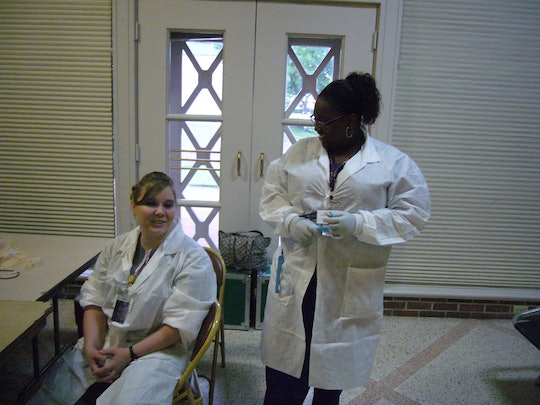 It's been more than four years since the birth of my first child. The one who nursed or cried non-stop for three of the four days I was in the hospital after a c-section. The one you told me, with gentle, reassuring authority, would be just fine.

I have absolutely no doubt you have forgotten about me. Don't worry, it's cool. As a patient, I wasn't remarkable in any way that would make me stand out: first-time mom, 28 years old, emergency c-section, healthy baby. Besides, T told me that I had given birth during a slow week--7 mothers total on my floor, which was about one-third of the traffic you usually see in this particular New York City hospital. So, by my calculations, if you're still working in the maternity ward, you two have now helped approximately 4,500 new moms and babies. And you do this in 12-14 hour shifts. We patients must all be a blur. We'd be a blur if your entire life were your job, but it's not. T, you have a husband and two teenage children. L, you care for your elderly mother and help raise your niece. And yet never once did you make me feel like a mere blip on your radar. Never did I think, "These women are just waiting for their shifts to end."

When I talk about the first days of my son's life, I refer to you two as my "fairy godmothers." Describing you as "the two night nurses on duty" feels insufficient. Your colleagues on the day shift were great, too, but I didn't need them quite as much. My husband was with me during the day. I had visitors. I had check-ins with my doctor. I had a great view of Central Park and could stare dreamily out the window and watch New York go by as I clumsily breastfed for what felt like (and quite possibly was) the 20th time that day. But by 10 p.m. or so, it was just me and my new baby, completely alone and often not quite knowing what to do with one another.

Now, being clueless about a new baby with your partner there is doable. You are comforted in the other person's cluelessness and you realize that neither of you knows what is going on, but that together you can probably fake your way through it. The feeling a new parent has alone with a baby should have its own word. Fear of inadequacy, fear of incompetence, fear of doing something wrong, overwhelming, all-consuming love, physical pain you can't distract yourself from anymore, emotional pain you can't distract yourself from anymore, excitement, contentment, panic.

L, you were there the first two nights, and you were the one to assure me that my son wouldn't break. That I wouldn't break him. You reassured me that his sometimes incessant wailing wasn't any indication that something was wrong. He was healthy, he was being cared for; he was fine. When you could see me getting overwhelmed, you would take him from me and within moments have him rocked into silence. I only had a couple seconds to gaze at you in dumb gratitude before you struck up a conversation and started cracking jokes, completely unfazed by the magic of your arms. Unaware, or maybe not, that you had brought me from the edge of the darkest part of that emotion that doesn't yet have its own name.

T, the second two nights, you assured me that I wouldn't break. That he wouldn't break me, though after two days of sleeping in 10-minute increments, I felt he already had. When I sobbed about whether to supplement breastfeeding with formula and I asked you, "Please tell me what to do," you sat down, folded you hands across your lap and said very gently, "No. You're going to decide. I'll sit here with you and we will talk about it for as long as you need, and in the end, you will make the right decision for you." And you did. And I did. And afterward you scolded me for not making rest a priority and for not drinking enough water as you tucked me in like you were my mother and I was six. You cuddled my baby and as I finally drifted off I saw you set him down sleeping in the bassinet beside me. I slept for three and a half hours, which was the longest stretch I'd had since I went into labor. The next night things were better and you came back to me with the smiling reassurance: "You're going to be a good mother, I can tell; You have good instincts."

I can never, ever tell you what it meant to me to hear those words from you. To hear that I was good enough from someone who was so capable, to whom this all seemed to come so naturally, made me feel pure elation. But like L (who, I learned, was your best friend), you seemed completely unaware of your incredible power, because as I opened my mouth to thank you, that's when you showed me the two enormous bags of diapers and other nursery supplies you'd brought me. "Don't forget to empty your stash as often as you can. The staff will refill it and then you'll have plenty of extra at home." You tossed the remaining diapers from my room's supply into the bag as well. "Seriously. This is the good stuff."

For thousands of years, women gave birth within communities of other women. Women they'd known their whole lives, their peers, their friends. They shared knowledge, they helped during delivery, they even nursed each other's babies if the need arose. That's not to say our foremothers lived idyllic, Utopian existences: They died in droves and the communities they built were formed in absolute necessity, not vision. I don't want to return to those days wholecloth, but birth communities not being part of the everyday existence of women has removed an important emotional connection to new motherhood that has not lost any of its relevance. So now, what once fell on an entire village falls on nurses like you, and without it being required of you, you have stepped up.

L and T, you cannot know how hugely important you are in the story of my birth, or how to this day I stand in awe of all you were able to teach in four short days. Yet I know I'm not the only one you've profoundly helped, and what's more is that I know you two are not the only fairy godmothers out there — there are millions of nurses who serve as caretakers, cheerleaders, psychologists, and friends to vulnerable, hormonal, and scared new parents.

You're all amazing. Thank you.

Jamie, taking the liberty of standing in for millions of new moms everywhere