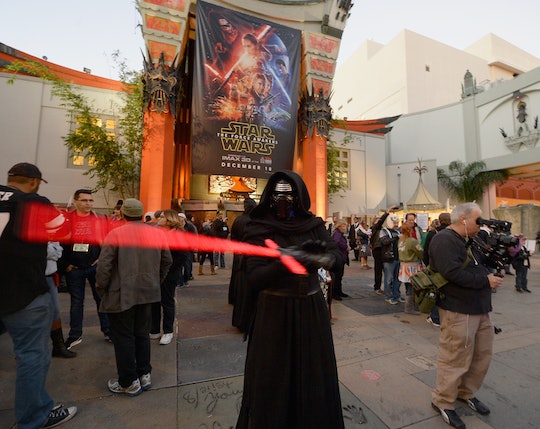 Anyone who hasn't been living under a WiFi-less rock already knows that Star Wars: The Force Awakens opened Friday at midnight, and, as expected, it was a huge deal. Fans worldwide went crazy for the latest Star Wars installment at the midnight premiere, and there is already plenty of photographic evidence. From long line-ups, to intricate costumes, and packed-to-the-brim theaters, photos of the Star Wars midnight premiere show that fans took it very seriously. Like, Han-Solo-"I know"-scene seriously.

The film is set to shatter box office records, already laying claim to the title of the widest December release of all time, while also being estimated to have brought in a whopping $14.3 million in one day in the UK alone (no big deal!). In fact, the film easily obliterated its closest competition for that record: The Force Awakens ousted Skyfall for the biggest-grossing first-day UK release by £3.4 million — about $5 million.

So what did the experience look like for those of us not lucky enough to be there (or, uh, who were fast asleep long before midnight because our kids wake us up at the crack of dawn no matter how late we’ve stayed up the night before)? Fans were super dedicated to celebrating the night accordingly.

There Were Costumes, Obviously

Rain or shine, you know they're going to be there.

A Crap-Ton Of Light Sabers

And Uh, An Orchestra?

Then Darth Vader Served Popcorn Because, The Force Was So Strong

And Just In Case You Thought You'd Seen Everything, There Was Also A Wedding

I mean, of course there was.

Oh, Star Wars fans. You're the very best ever.