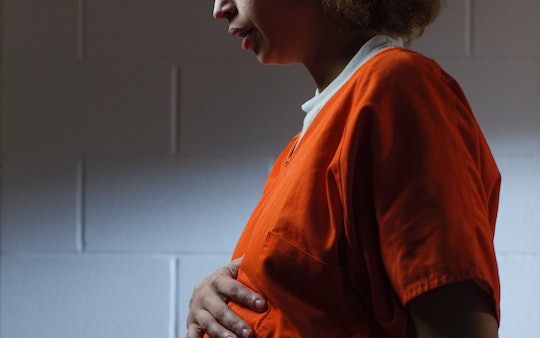 Opinion: We Can't Forget About Pregnant Women In Prisons Across The Country

As our country grapples with the effects of COVID-19, some are calling for governors to extend compassionate release of vulnerable populations like pregnant women. The fear that we are all experiencing in this unprecedented moment is heightened for those who are incarcerated — crowded, unclean conditions are what lead to the Cook County Jail in Chicago becoming a hotspot for COVID-19, placing a vulnerable population at an even greater risk.

As a formerly incarcerated person, I hope there will be humane solutions for every person inside the walls of a prison cell. But I am especially haunted by the possibility that we are not doing enough to protect the pregnant women who are incarcerated.

Pregnant women make up a small percentage of the female incarcerated population — 6% — but in incarceration, they are one of the most vulnerable populations in our society.

How dire are conditions for pregnant women in American jails and prisons?

The worst thing we can do to pregnant women in jail is force them to give birth in chains. In addition to the “severe mental distress, depression, anguish, and trauma” the American Psychological Association cites as a subsequent outcome, the shackling of pregnant women endangers the lives of both mother and child, by exacerbating pain, inhibiting diagnosis of complications, and limiting movement.

There is no justification. According to a 2019 study in the Journal of Obstetric, Gynecological, and Neonatal Nursing found that in 61% of cases of delivery in shackles, the given reason was protocol, rather than danger or flight risk.

The danger extends beyond childbirth. When a woman is pregnant, her center of gravity moves, making falls more likely. When shackled, she is unable to brace herself in the event of such a fall, once again endangering both mother and child.

Several federal courts have recognized the risk of shackling and have expressly condemned the use of such restraints on pregnant women as a violation of their Eighth Amendment rights, but in many places the practice continues.

While the 2018 First Step Act prohibits the shackling of pregnant women (unless they pose a risk to themselves or others) in federal prisons, this does not apply to women in state prisons and county jails. In fact, there are 23 states that still do not have laws that prohibit the practice, and have opted to use shackles regardless of the listed objections.

A pregnant woman who does not receive prenatal care is a cause for concern under normal circumstances. It is beyond alarming when you consider the conditions inside prison, where poor hygiene and stress are constants.

In addition to shackles, we must also pay attention to the lack of appropriate medical care for pregnant incarcerated women.

Although all U.S. prisons and jails are required to provide prenatal care, at least 12 states do not have basic prenatal care policies, even though said care is essential to upholding the principles of the Eighth Amendment against cruel and unusual punishment.

What are the implications, then, for prenatal and postnatal care during this pandemic? A pregnant woman who does not receive prenatal care is a cause for concern under normal circumstances. It is beyond alarming when you consider the conditions inside prison, where poor hygiene and stress are constants, during an epidemic — and the fact that incarcerated women are also far more likely to come from precarious socioeconomic backgrounds where substance abuse, poor nutrition, and sexually transmitted disease are more likely to contribute to complications.

Given that we do not yet understand the risks of COVID19 for pregnant women and their unborn babies, governor’s should move to compassionate release or home confinement programs similar to those used by the Federal prisons.

Pregnant women should be released immediately provided they have a reentry plan that includes a stable support system, access to social services, pre- and postnatal care, financial assistance, and transitional housing for themselves as well as the newborn. We know it is simply not safe or helpful to release people without the support they need.

I implore the people elected to be our public servants to take the path of humanity and compassion. Those are the values we should practice in this time of fear.

Then we should ask why women who are pregnant are incarcerated in the first place — pandemic or otherwise.

For the expectant mothers and the innocent children, change cannot come soon enough.

Michelle Cirocco is a formerly incarcerated woman who is currently the chief social responsibility officer for Televerde, a business that employs incarcerated women to staff their contact centers and provide valuable work experience for life after incarceration.

More Like This
OB-GYNs On How The End Of Roe Changes How They Can Care For Us
Is It Safe To Keep Using Period & Fertility Apps In A Post-Roe America?
Everything To Know About Pilates During Pregnancy
Pitocin Induction: What It Is & The Play-By-Play