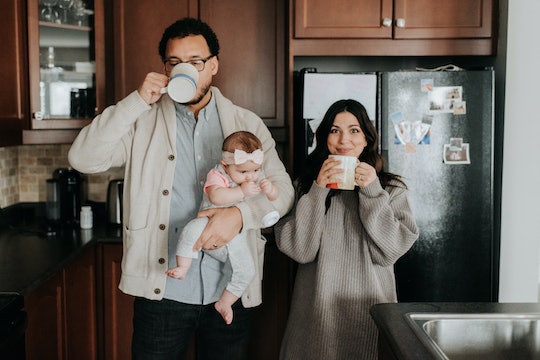 Opinion: We Should Pay Parents To Stay Home

Millions of U.S. students will be at home on any given weekday this fall. The Los Angeles Unified and San Diego Unified districts, which collectively serve 850,000 students, announced on July 13 that they will be all-virtual for the first semester of the 2020-2021 school year. In New York City, the nation’s largest school district, the current plan is that students will attend school in person between one and three days. These decisions, while defensible particularly in areas with rising spread of COVID-19, shift an untenable burden onto parents and create a massive secondary child care crisis aimed squarely at working mothers. The only viable solution that honors the needs of parents, children, and teachers is as simple as it is bold: Pay one parent per household as a caregiver until schools fully reopen. This can be accomplished through the advent of Pandemic Educational Leave.

To accept such an idea, you first need to accept that: a) caregiving is a form of labor essential to child development, if an unpaid or grossly underpaid labor in this society; b) paid leave encourages people to remain in the workforce (and is common around the world); and c) not offering governmental support to parents at this time is the same as asking them to provide free labor for the economic recovery. We have no problem diving into the public purse to save banks and ailing businesses and collateralized debt, but we often take the view in the United States that parents need to go it alone. The pandemic is both an economic crisis and a crisis for families caught in the impossible position of needing to work to feed their kids while lacking child care, and it deserves a family-oriented stimulus.

Pandemic Educational Leave (PEL) would operate much like short-term disability, except the federal government would fully reimburse employers. PEL would be made available to one parent/guardian in a household with children younger than 15 who attend a district going at least partially virtual. It would supply 100% of the parent’s current salary, job protected, up to $50,000 — prorated based on the days of in-person school provided (so a parent whose child is in school two days a week would still be expected to work those days) — and then gradually phase out from there.

The truly affluent, who have the means to hire a caregiver, would not be eligible, nor would certain essential employees. For unemployed parents, PEL would provide a stipend based on their wages over the past year to compensate for the difficulty these parents will have getting a job due to child care issues. Administratively, this would be a relatively simple program to implement since businesses would just continue payroll as usual and send receipts to the government. The ease of implementing direct wage subsidies is one major reason that many European nations have been successful using them to keep their workers afloat.

(It should be noted that some parents have access to a version of paid leave via the Families First Coronavirus Response Act, but that legislation manages to miss 75% of the workforce and only offers partial wage replacement.)

At best, children will be shuffled about with little routine; at worst, we are going to start seeing 9-year-olds left home in charge of the 6-year-olds.

The immediate objection: Wait, don’t we need those parents in the labor force? The consulting firm McKinsey suggests around 27 million parents require child care in order to work. It’s safe to assume that — once you take out essential employees and account for two-parent households plus fully in-person districts — the maximum usage would be around 10 million parents. There are at least 17.8 million Americans currently unemployed, per the Bureau of Labor Statistics. While some jobs require specialized skills and cannot be done by a temporary replacement, many do not. Since the government would be paying for the leave, businesses would be able to go on a temporary hiring spree.

A distinction needs to be made between PEL and homeschooling. Homeschooling is when a parent fully assumes the role of teacher and conducts a curriculum. Under PEL, the parent’s role is to ensure the child is accessing their remote learning platform, and offering them educational assistance when needed. For younger children who do not have the developmental ability to sit for long Zoom classes, parents will have to be more hands-on and follow the teacher’s lead in helping kids gain critical literacy and math skills. Absent such supervision, we have ample evidence that remote learning tends toward disaster.

The challenge with virtual or staggered schools as it stands, of course, is that parents cannot both work and provide supervision or learning support. In fact, most cannot be home with their children at all. The Economic Policy Institute reports that “less than 30% of workers can work from home, and the ability to work from home differs enormously by race and ethnicity,” as well as income. These needs are not theoretical: A survey by the New York City Department of Education found that roughly half of its elementary school parents and nearly a third of middle school parents will require child care.

Families are going to respond by finding some place for their children to be so parents can work and put food on the table — witness the dizzyingly fast rise of "podding." However, this ad hoc system threatens both kids’ learning and well-being, particularly for those in families with less means. At best, children will be shuffled about with little routine; at worst, we are going to start seeing 9-year-olds left home in charge of the 6-year-olds. This buckshot approach also threatens to give away all the ostensible public health gains. The Illinois State Board of Education called this out in recent guidance, writing that districts should consider whether staggering schedules “...may lead to many children needing to be in other settings — with other groups of children — for parts of their day and/or week. Such mixing of children between groups may substantially lessen the effectiveness of districts’ strategies for limiting children’s contacts to minimize potential virus transmission.” While schools don’t risk viral spread under a fully virtual plan, the community and households certainly do — the latter a particular concern given how many grandparents are about to be pressed into service.

(There will, of course, still need to be external care settings for children of essential personnel, just as there were at the beginning of the pandemic. Having to only supply those settings for a limited population, however, allows for small group sizes. This severely reduces an already low risk; the YMCAs taking care of such children in the midst of New York City’s awful surge had no reported outbreaks, as NPR notes.)

Even for those children whose parents are able to work remotely, the miserable attempt to multitask is effective for exactly no one. As Deb Perelman explained in her recent viral op-ed, we are currently asking parents (particularly mothers) to be full-time workers, full-time parents, and part-time teachers. That’s a setup for doing none of the roles well, while stressing out the whole family. And indeed, there has been a quantifiable hit to both parental and child mental health during this time, particularly for lower-income families. That’s before the tsunami of anxiety now heading parents’ way.

This is also the best way to head off brutal learning losses which threaten to set back an entire generation of children and widen existing inequities. It is difficult to square the nation’s supposed newfound interest in racial justice with the bodyblow children of color are about to take.

Remarkably, the price tag for rescuing America’s parents and children from being “rolled over by the wheels of an economy that has bafflingly declared working parents inessential,” as Perelman puts it, is quite reasonable. Even again assuming a high take up of 10 million and an average PEL benefit of $50,000 (roughly the median salary in the U.S.), the program would cost $500 billion for an entire year; if we have a vaccine in time for full in-person schooling in early 2021, the cost would be at least halved. Congress has already appropriated $669 billion for the Paycheck Protection Program; consider this a Parent Protection Program.

There are, moreover, cascading benefits that offset the cost. That money would serve as a shot of economic nitrous by clearing the way for millions of unemployed nonparents to find temporary work. Those economic benefits (plus the gratitude of millions of parents) make the concept more politically viable than it might first appear. This is also the best way to head off brutal learning losses which threaten to set back an entire generation of children and widen existing inequities. It is difficult to square the nation’s supposed newfound interest in racial justice with the bodyblow children of color are about to take. There are details to be worked out, to be sure. Top of mind is how to prevent such a scheme from disproportionately landing on the shoulders of mothers (although it should be pointed out that women are already being put in an Atlas pose; this would at least partially unburden them). And in areas with low community spread of COVID-19, it still makes sense to pursue in-person instruction, at least for pre-K and elementary schools.

The die has largely been cast, and we have to shift to addressing the reality of the millions who will not set foot inside a school building this fall. While districts are now scrambling to cobble together a smorgasbord of tertiary locations to take in children, it is hard to fathom such a task ending well. The solution is in front of our faces, if we choose to realign our sight: Let parents be parents.

More Like This
From Captions To Gifts, These Are All The Kindergarten Graduation Ideas You Need
These High School Graduation Speeches Will Give You Hope For Our Future
Fun Ways To Celebrate National School Nurse Day
Why I'm Talking To My Teenage Son About Abortion — And Vasectomies