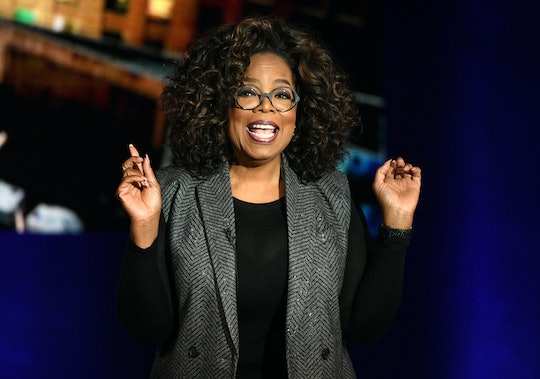 Of all the accomplishments Oprah has, one that seems to mean a great deal to her personally is the Leadership Academy for Girls in Africa. She recently took time to celebrate a big day with several of the girls when Oprah took a graduate from her South African school wedding dress shopping. The mogul even posted a sweet photo the young girl and her excited friends during the trip to Instagram.

The Daily Mail reported that the mega-celebrity shut down Saks Fifth Avenue in Beverly Hills for the shopping spree, and the group left after securing a $10,000 dress for the big day. Though the bride-to-be, who goes by Glori_r on Instagram, is holding a dress in Oprah’s photo, there’s no indication whether that was the one that was the ultimate choice.

“I’ve known these girls since they were 12 and 13 coming to my school. Graduating from college. Grad school. Now our first wedding. Looking for the perfect dress. #biglifemoment,” Oprah wrote on her post. Glori shared another photo on Instagram moments with the same dress that may not have gotten the seal of approval. “Mum O like, ‘Nooooo, that can’t be it, Glori.”

The group had a whole day of fun, according to Daily Mail, with lunch at Spago before the dress shopping.

This isn't the first time Winfrey has treated girls from her school to special occasions. According to Page Six, in 2015 she invited 20 students to a performance of The Color Purple on Broadway, dinner at New York City’s Rainbow Room, and makeup classes. She’s also been known to invite them to her house for special, home-cooked meals.

In a documentary about her school Oprah talked about the difficulty some girls have when celebrity life is juxtaposed with their reality at home. Entertainment Tonight reported that she said in the film, “The very first time we had dinner at my house, Mpumi ran out and did not want to sit at the dining table because she was thinking about her grandmother, who could not have such a meal. I think constantly there is the balancing of, ‘I’m the one who got out, I’m the one who has the opportunity but what about the people I’m leaving behind?’”

The school opened in 2007 and takes girls from some of the most impoverished communities in for boarding and education. The Daily Mail reported that Oprah promised Nelson Mandela that she would be there to see the graduation of the first group of girls. The three that she took shopping this weekend were part of that inaugural class.

She’s been active with graduates ever since, regularly attending their graduations from college and beyond, the outlet reported.

This outing wasn’t Oprah’s only wedding-themed activity of the weekend. She also attended Katherine Schwarznegger’s bridal shower for her upcoming wedding to Chris Pratt, CinemaBlend reported. The producer is apparently a longtime friend of Schwarznegger’s mother, Maria Shriver. Pratt and Arnold Schwarznegger also briefly showed up at the shower, with Pratt making a sweet toast, according to People.

Whether Oprah will show up at either the weddings for Schwarznegger or Glori remains to be seen. Nonetheless with her shopping spree she’s made a lovely memory with the bride-to-be.