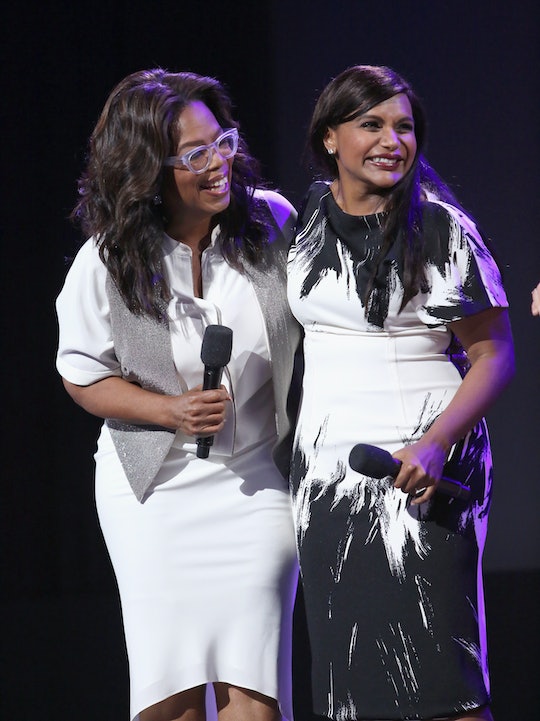 Oprah's Gift For Mindy Kaling's Daughter Is THAT Extravagant & Amazing, It Came In A U-Haul

Chances are you already wanted to be friends with Oprah Winfrey, but the following story is likely to kick that longing into overdrive. Turns out that the billionaire gave her friend/A Wrinkle in Time co-star Mindy Kaling a present for her new baby and, yes, Oprah's baby gift for Mindy Kaling's daughter is exactly as extravagant and thoughtful as you'd imagine. Little Katherine Kaling is one lucky lady.

On Sunday, USA Today interviewed Kaling, along with Winfrey and their fellow Wrinkle in Time star Reese Witherspoon, and Kaling related the whole, epic story. See, Kaling's daughter Katherine was born in December and, not long afterward, Kaling's assistant called her with some exciting news. According to Kaling, her assistant announced that Oprah's assistant had contacted her, wanting to drop off a present from the entertainment mogul. "I'm thinking, that's so nice, like, (it's) probably flowers," Kaling said in the interview with USA Today. "I had a kid, I'm a single mom. That's really nice Oprah remembered."

But this is the woman who gave everyone in her studio audience free cars. Of course she didn't just drop off some flowers. Instead, Oprah sent two men with a U-Haul to Kaling's house, and Kaling knew exactly how excited to get. "All you want in life is to hear that two men in a U-Haul truck are coming to your house because Oprah sent them," she told USA Today. "I was supposed to go to work that day (but I was like), I gotta be here."

So what was in this mysterious truck? Kaling said:

They arrived with a hand-carved bookcase, prettier than any professional dollhouse you had ever seen that contained a hundred of the classic essential books in children's literature. And I held my baby up to it and I said, "Did you see what Miss Winfrey did for you?"

Not only that, but each book in the bookshelf had "Katherine's Book Club" written on it.

Excuse me while I die of a strange combination of delight and envy.

It's the perfect gift for so many reasons. First of all, who doesn't want a gorgeous, hand-carved bookshelf, stuffed with the best kids' books of all time? But also, Kaling and Winfrey became friends through making A Wrinkle in Time together, which is an adaptation of the classic, well-loved children's book. Of course Winfrey's gift would focus on the power of reading, and all the comfort and joy that it can bring to young people (and to middle-aged people, and old people! Reading is the best!). I'd imagine that A Wrinkle in Time has a prominent place on the shelf.

And it makes sense that Winfrey would go all out on a present for Kaling's baby. Not only is Kaling hilarious and amazing, and deserving of all the extravagant baby gifts, but Winfrey also happened to be the first person to publicly confirm Kaling's surprise pregnancy, accidentally announcing it in a People interview. It was like, O.K., if anyone was going to announce big news about your private life, Oprah Winfrey is the person. And you also can’t be like, "Hey, Oprah, zip it," because she’s almost like a religious figure... I think I learned a long time ago it’s probably not a good idea to reprimand Oprah.

Still, Winfrey may have felt that it couldn't hurt to send a totally extra baby gift, just in case.

Funnily enough, even though Kaling was clearly bowled over by the present, Winfrey still felt that it wasn't as perfect as she wanted it to be. She'd hoped it would look exactly like the treehouse that Kaling's Wrinkle in Time character lives in, according to the USA Today interview, while Kaling said, "Now it only looks like a beautiful castle."

Now, if anyone has any leads on how to get into A Wrinkle in Time 2 so that I can become best friends with both Kaling and Winfrey, please let me know.

More Like This
Alec & Hilaria Baldwin Welcome Baby #7, And Revealed Her Cheerful Name
Gabrielle Union Admits She May Be Becoming A Bit Of A Dance Mom With 3-Year-Old Kaavia
Rihanna's First Post Since Giving Birth Confirmed She's Performing At The Super Bowl
Snooki Hints That A Sunday Dinner With All The Jersey Shore Kids Is In The Works