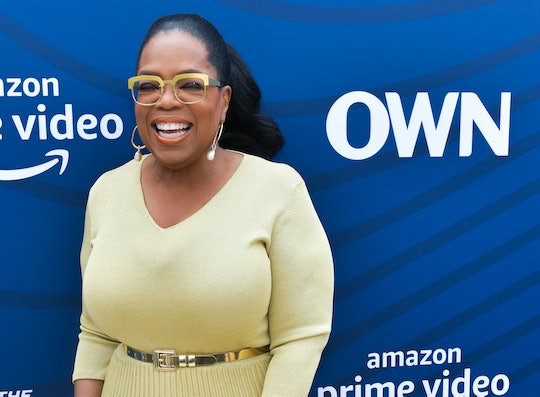 If there's anyone that's about as famous as Prince Harry, Meghan Markle, and the royal baby they are about to meet, it's Oprah Winfrey. She's met every celebrity, from the titans to the train wrecks, and she has the drill down. So when asked on the red carpet exactly what she has up her sleeve to gift to her pals Prince Harry and Meghan Markle on the occasion of them becoming parents, the mogul didn't hesitate. Far from agonizing over it, Oprah's gift for Baby Sussex is her go-to baby gift and it's pretty impressive.

As Access reported, Winfrey, recently caught on the red carpet, seemed ready to field questions about the upcoming royal birth and her friendship with Harry and Meghan. "I don't know the baby's name or the baby gender," she clarified to the TV news show, surely having been asked this one too many times before.

But as Town & Country noted, it's a natural conclusion to think Miss O might have baby details to share, since she is close with the couple, having attended their 2018 wedding and now, announcing a partnership with Prince Harry to create a documentary series about mental health launching on Apple TV next year, the magazine added.

And don't forget, Oprah's BFF, Gayle King, was a guest at Meghan's baby shower in New York, and that King later defended the duchess in the face of overly harsh press criticism, as USA Today noted.

So it makes sense everyone wants to know what a media goddess gets a duke and duchess for a baby gift. Only thing is, Oprah has a sort of protocol for this kind of situation. "Oh honey, I have a standard gift that I do for people that I really care about," she told Access. "This baby will have enough books to last a lifetime!"

OK, so we're talking some picture books, right? No biggie, just as you and I would do... purchase a copy of Goodnight Moon, Runaway Bunny, Go Dog, Go. Maybe, because it's Oprah, she'll throw in some Fancy Nancy or Llama Llama Red Pajama, with a smattering of Madeline books? Nice gift, right?

Uh, guys, this is the owner of an entire media empire, OK? She's not talking a couple of books, she means, like, an entire children's library collection, a full-on literary legacy.

Fans with a memory for celeb trivia will know this because, as she said, she's done it before... and one of the lucky recipients of her largesse shared how much it meant.

Mindy Kaling, Oprah's Wrinkle In Time co-star told USA Today that when daughter Katherine was born in December, 2017, she got a call about a gift. "I got a call from my assistant. She said, 'Oprah's assistant contacted me, she'd like to drop off a present,'" Kaling said. "I'm thinking, that's so nice, like, (it's) probably flowers."

But what actually happened was that a U-Haul truck pulled up, much to Kaling's astonishment. "All you want in life is to hear that two men in a U-Haul truck are coming to your house because Oprah sent them," she recalled. "I was supposed to go to work that day, (but I was, like), I gotta be here."

Inside the truck was "a hand-carved bookcase, prettier than any professional dollhouse you had ever seen that contained a hundred of the classic essential books in children's literature," Kaling explained, as per CNN. And yes, the actress confirmed each book had a "Katherine's Book Club" stamp on it, in reference to Winfrey's famous literary club.

So, like everyone else, we may not know much about when Baby Sussex will make his or her debut. But we do have some idea what the kid might be doing in the future... reading all the books Oprah sent. Because that may take quite awhile.