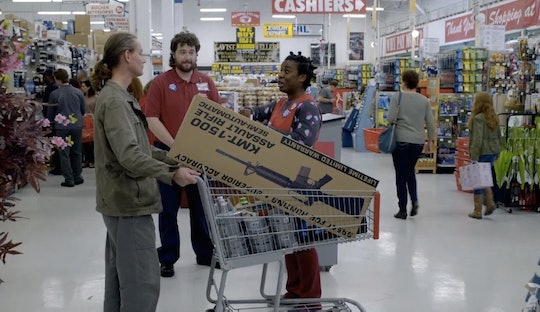 The AR-15 has recently re-entered into conversation after the tragic Orlando Pulse shooting, so it is surprising to see that Orange Is the New Black already involved such a talked-about topic so close to the most recent tragedy. This wasn't predicted by the show, since the AR-15 has been a talked about weapon for a while. For instance, the weapon itself was used during the San Bernardino attack in December, 2015.

In the scene, Suzanne is checking a customer's cart along with their receipt to make sure everything on the receipt was what they were walking out of the store with. Their list was toothpaste, orange juice, and an AR-15 assault rifle. With that, the customer was OK to leave. While the statement is subtle, it certainly speaks volumes to know that it was so simple for a customer to walk into the fictional big box store that Suzanne worked at and purchase a rifle.

CBS News performed an interesting experiment following the Orlando Pulse tragedy and sent a producer to a gun store in Alexandria, Virginia (just outside of Washington D.C.). Just 38 minutes later — after showing two items of state residency and a passport — the producer walked out of the store with a rifle, ammunition, and a 30-round magazine. The news source points out that Virginia is one of the 41 states with no waiting period beyond a background check to buy a firearm.