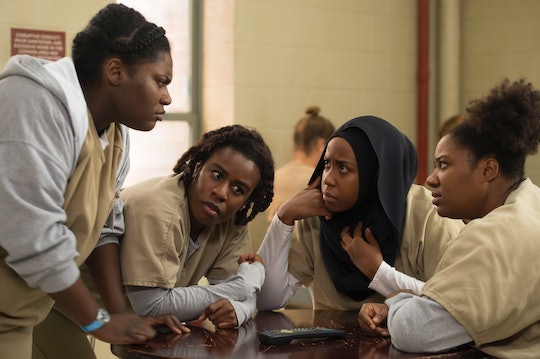 Similarly to how the literal day after a presidential election, I can't help myself from speculating about what the candidate pool will look like in four years, and Orange Is the New Black fans can't help mulling over where the series is headed mere hours after a new season's release. Season 4 premiered on June 17, and fans who had no problem binging it in one weekend are already wondering what will happen in Orange Is the New Black Season 5? There are a few compelling theories floating around Reddit.

Season 4 leaves us in the middle of a prison uprising, with rioting inmates taking the guards hostage and Dayanara Diaz pointing a gun at Humps a.k.a. C.O. Humphrey. And if you're thinking, "But there are no guns in minimum security women's prisons," you would be correct. The somewhat sociopathic Humps decided to go rogue and bring his own handgun in "for protection" after one of the guards accidentally kills Poussey. At the exact moment the three (racially separated) factions of the prison converge on the guards, Litchfield's highest profile inmate Judy King happens to be getting escorted out, due to an early release. MCC doesn't want to deal with the heat of her being at the prison when an inmate died, so they backdate her paperwork and make her promise to claim she was already out by the time Poussey died. One of the Season 5 theories picks up on Judy's curiously centered appearance in the riot scene.

"The gun goes off and Judy King accidentally gets shot," Redditor maverickLI speculates. "MCC spent her entire 2 month sentence keeping her sheltered, it would show that no one is safe inside the walls. And be the biggest news story of the year."

Another user in the thread points out that, since MCC already backdated her release, Judy King getting shot inside the prison would leave them with a huge problem to explain. It would definitely be a satisfying bind to watch villainous corporation MCC try to get out of, and hopefully it would lead to them finally facing some consequences for their actions.

The other big question is whether Daya will shoot Humps, whether another inmate will shoot Humps, or whether someone like Gloria will try to protect Daya by wrestling the gun away from her and accidentally get shot herself in the process. It's true that, under normal circumstances, the simple act of pointing a gun at a C.O. would get Daya thrown into maximum security prison. However, since the gun isn't supposed to be in the prison in the first place, and is only there because several C.O.s broke the rules to get it in, MCC or Caputo might cover up the whole incident to avoid further implicating themselves.

While it may seem unbelievable that Daya would ever shoot anyone, the choice to put the gun in her hand might just be a plot device by the show writers to lure her mother, who has just been released, back to Litchfield. It would be one way of keeping her storyline alive.

Finally, more and more people on the outside are beginning to learn of the disturbing inner workings of Litchfield. Poussey's high-ranking military official father now knows that his daughter was killed by a guard there. Crystal Burset has proof that Sophia was held in solitary for no reason and for an inhumane length of time, plus an MCC employee pulled a gun on her. And Judy King, if she escapes the riot, has all the power and the resources to shine a light on what really happened to Poussey. All these forces could join together on the outside to try and affect change inside the prison and in how it's run.