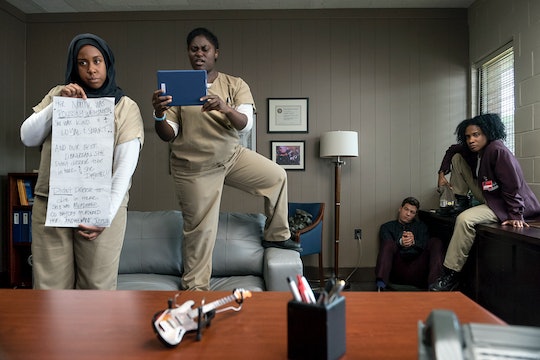 These 'OITNB' Season 6 Theories Explore What The Future May Hold

It may be a whole year before a new season of Orange is the New Black makes its way to Netflix, and that long wait could feel especially unendurable because the end of Season 5 left so many questions unanswered. The future of every single character is unknown and uncertain, but it doesn't look good for any of them. The show's fifth season was full of upheaval and it will be a long time before fans get to see what new turns the show will take. Luckily there are Orange is the New Black Season 6 theories to tide you over until the new episodes arrive. Warning: Season 5 spoilers ahead!

The riot that dominated the majority of the season ended with major consequences. Most of the women were separated onto different buses to be sent elsewhere — presumably to other prisons, though who knows if it will be a permanent relocation or not — while a small group of main characters were left behind, at the mercy of the officers who were storming Litchfield to reclaim it. It's not clear whether Season 6 will reveal that there were casualties when the prison was taken back, or even if the new season will follow Litchfield at all anymore. Perhaps it will explore the inmates in their new facilities. These theories tackle it all.

Based on how the finale ended, it would be difficult to imagine that all the women left behind in the abandoned prison pool will make it out alive. The officers arriving at the prison were ready to use force and the show left the situation open-ended enough to imply that not every character would make it. That means one of them could be gone for good when Season 6 returns. Maybe you should start getting ready to say goodbye to Freida, Suzanne, Taystee, Cindy, Red, Piper, Alex, Nicky, Gloria, or Blanca.

Everyone Moves To Max

Another possibility, put forth by Reddit user SurvivunSawyer, is that all 10 women who remained at the pool will end up in Max. Then episode by episode, Season 6 will reveal that one of them was alive (with appearances by other characters who had ended up in Max, like Sophia and Daya) until it reaches the end and viewers discover who died in the riot. It would definitely keep viewers hanging, but might feel kind of manipulative.

Saved By The Bell: The New Class

If all of the inmates get transferred out of Litchfield because of the riot, then presumably the familiar halls will then be filled with unfamiliar characters with their own stories. Season 6 could be a reset: all new characters, all new backstories, same old setting. It probably wouldn't go over well with audiences, but anything's possible.

Alex only escaped her old boss Kubra's plot to kill her by murdering the assassin and faking her own death to get Kubra off the trail. However, as Reddit user RawakiS points out, the viral video of Piscatella assaulting Alex made it clear that she is still alive. If Kubra gets wind of that (and he surely will) then he'll be out to get her again.

Reddit user hjonsey wonders if the outcome of the pool showdown could be a little more unexpected than a fan favorite character dying. Perhaps Piscatella exiting first (combined with video of him torturing the women) could lead people to believe that he was actually holding them all hostage. Which he was, just not at that exact moment. That could give the women a way out instead of getting in more trouble. And honestly, Piscatella deserves all the blame people want to heap on him.

Linda moonlighting as an inmate was mined for laughs through Season 5, but she might find her tenure behind bars lasting a little longer than expected. With the prison records destroyed (thanks, Leanne and Angie!) and the inmates happily insisting Linda was one of them, she could end up sticking with her false identity into Season 6. Of course, fingerprinting would quickly resolve the entire thing, but zanier things have happened on this show.

It's hard to say what direction Season 6 of Orange is the New Black will take, but there are endless possibilities.