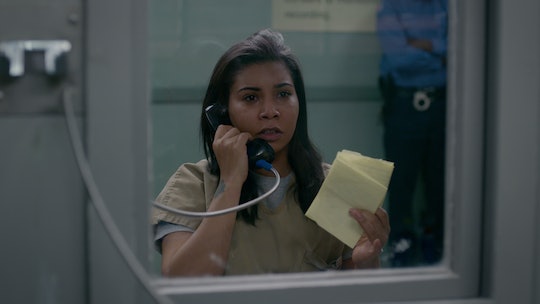 'OITNB' Season 7 Is All About Moms

More than any previous season, Orange Is the New Black Season 7 goes out of its way to complicate our ideas about mothers who are incarcerated. The show argues that, rather than offering a release from parental duties, incarceration only exacerbates them.

We see it in Maria (Jessica Pimentel) trying to be comfortable with a new woman in her daughter's life while she is locked away and in Lorna (Yael Stone) being unable to confront the reality of her son's death while separated from her husband and any mental health resources.

Watching OITNB as a mom and someone who spent years in the foster care system as a child, I see the anguish of separation from two vantage points. And in a society apt to judge them as selfish abandoners rather than people in heartbreaking circumstances deserving of compassion, Orange Is The New Black invites viewers to relate to incarcerated mothers. This is important.

As a mom, you constantly question your decisions for your kids and how those decisions will impact them long-term.

Eighty percent of the reported 2,879,000 women who are jailed in the U.S. annually are mothers, per FBI data and the Vera Institute, and Orange Is the New Black interrogates the complicated feelings of helplessness, grief, fury, and guilt that attend being an incarcerated parent. Until I started watching OITNB, it was easy to see incarcerated women as "other," but the show bestows them with rich inner lives, humanizing them, making the characters relatable and sympathetic.

These characters' stories become especially poignant when watching as a mother, forcing me to reflect on how I would feel if this were my own situation, and on the real women living in these circumstances right now.

As a mom, you constantly question your decisions for your kids and how those decisions will impact them long-term. For most of us, it's about doing what we think is right and hoping it ends up working out. But for some moms, it's about making choices that are devastatingly complicated by a lack of resources, poverty, institutionalized racism, and a for-profit prison system.

In Season 7, Orange Is The New Black introduced Gloria’s (Selenis Leyva) two daughters, who she left in Puerto Rico when she moved to New York City in search of better opportunities. She planned to send for them when she had gotten settled but by the time she finally did, the girls had grown apart from her, feeling abandoned.

Even though her circumstances are extreme, Gloria's story is relatable. She's still a mom who has been doing her best to provide for her kids.

As a former child of the foster-care system, I empathize with Gloria's daughters. I know how time and distance can make a difference when your mom isn't around. I can also sympathize with Gloria's crisis because I understand how families caught in a cycle of poverty, with the deck seriously stacked against them, can struggle with the system. But I also relate to Gloria as a mom making tough calls for her kids — even though our relative options are so different.

For a mother to know she may never see her daughters again or see her son only rarely and at someone else's discretion... I can't imagine the pain. Even though her circumstances are extreme, Gloria's story is relatable. She's still a mom who has been doing her best to provide for her kids.

Elsewhere in Season 7 of OITNB, Lorna and Maria both grapple with trying to parent from a distance. Maria learns her daughter's father is moving on with another woman. And the seriousness of the relationship means the new woman will play a role in raising her daughter. Maria's reaction to the news is, naturally, outrage. Not only at the idea of being forgotten about while her family moves on, but about being unable to do anything about it from behind bars.

I want to be there to control every variable in my son's life... and I can't.

Lorna's son, Sterling, had health problems at the start of Season 7 as a result of being born prematurely. Knowing that your infant is in the Neonatal Intensive Care Unit (NICU) is bad enough, but Lorna couldn't even be there to see him before he died.

I have a need to be there physically to make sure my kids have what they need and grow up knowing me and knowing all that I do to give them good lives. But because I have to work to achieve these things for my children, I can't be there all the time. I want to be there to control every variable in my son's life... and I can't.

I'm not separated from him the way Lorna and Maria — and the very real women they represent — were forcefully separated from their kids. But there are times when I, too, feel powerless. Sometimes it feels like my choices are made for me and I can't spend as much time with my son as I would like to. For an incarcerated parent, this natural protective instinct and feeling of helplessness is both magnified and more real than what I experience.

Orange Is the New Black’s layered portrait of motherhood behind bars is another way in which the show develops the humanity of its characters — women society in general is apt to dismiss as totally inconsequential.

Of all so-called "bad mothers," there is perhaps no easier target than a mom in prison. But one essential good that Orange Is The New Black's final season did was highlight that mothers in all circumstances are still mothers. And most of them are fighting like hell: against ICE, against the system, against their own parents, to do what is right by their kids.