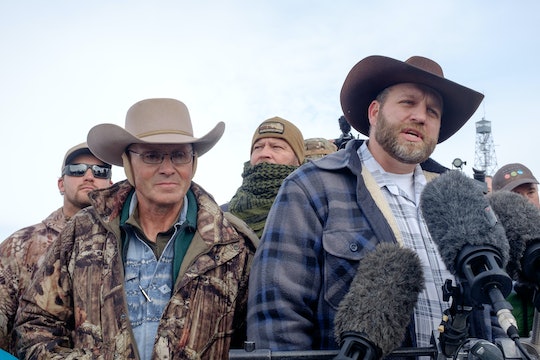 Protestors in support of ranchers have occupied a federal building in Princeton, Oregon, which is about 30 miles south of Burns. The militia is armed and led by Ammon Bundy, the son of Cliven Bundy, a man who was involved in a standoff with officials. The group is inside the Malheur National Wildlife Refuge is standing against the government and in support of Dwight and Steven Hammond, who are in jail for arson after a dispute about grazing rights, according to the Associated Press.

Ammon Bundy told reporters on Sunday morning that they plan on staying in the building "for years," according to CNN:

He also posted a video to his Facebook page asking supporters to join the armed occupation, closing with: "ALL PATRIOTS ITS TIME TO STAND UP NOT STAND DOWN!!! WE NEED YOUR HELP!!! COME PREPARED."

The group of armed men took over the wildlife refuge after a march yesterday in support of the Hammonds, who allegedly set fire to 130 acres of land in 2001 to cover up poaching, according to CNN. They were convicted of arson and sentenced to five years in prison. The father and son said they did it to protect their property from overgrowth and wildfires.

There are no officials in the building, according to reports. And there is also no sign of the protestors backing down. Bundy is joined by his brother, Ryan, and other militia members, though the group has not yelled called themselves that. Ryan told The Oregonian that the armed group is protecting ranchers:

The best possible outcome is that the ranchers that have been kicked out of the area, then they will come back and reclaim their land, and the wildlife refuge will be shut down forever and the federal government will relinquish such control. What we’re doing is not rebellious. What we’re doing is in accordance with the Constitution, which is the supreme law of the land.

A lot of the media coverage and conversation about the situation is about the remote location of the federal building and whether the militia should be treated as terrorists.

The jury was neither asked if the Hammonds were terrorists, nor were defendants ever charged with or accused of terrorism. Suggesting otherwise is simply flat-out wrong.

As of now, the Bundys and their supporters have no plans to leave the refuge and local officials have only warned people to stay away from the area, according to the Washington Post. As of Sunday morning, there are still no hostages.