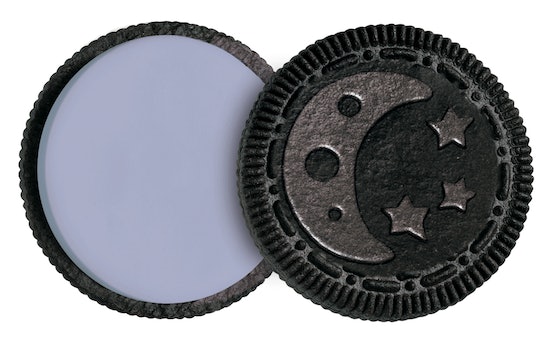 Some things may never change... but they can be improved upon. Take a certain sandwich cookie. It's been a staple of an American childhood as long as anyone can remember (especially when dunked in milk!), but now there is a new type of the famous treat. In time to honor the 50th anniversary of the first historic mission to the moon, Oreo has a new flavor in honor of the Apollo landing. This sounds like it's definitely going to require a trip to the moon for taste testing, no?

As Popsugar reported, the it-won't-last-forever new limited edition variety, dubbed Marshmallow Moon Oreos, will offer several cookie designs per package. Each design will be inspired by the incredible lunar visit on July 20, 1969, which marked the first time human beings walked on the moon, as National Geographic Kids confirmed.

The kickoff of this new product is coming in June, Popsugar noted, which makes sense so that there is plenty of time for excitement to build before the July anniversary. Inside the special packaging, which will actually glow in the dark and comes with stickers, as USA Today reported, will be specially-designed Oreo shapes per box.

Food website Delish clarified that the new Oreos will have three space-shaped designs. While the whole thing appears to be hush-hush (hey, the competition is fierce in the snack world, right?), Popsugar noted the new cookies will be shaped like either an astronaut in zero gravity, a rocket ship blasting into space, or a crescent moon set among the stars. Cute, right?!

Meanwhile, MSN confirmed the new Oreo's filling will be a light purple inspired by the moon. And while you can't see (or eat) the new cookies just yet, clearly, a trip to inspect this new invention will be required when next month hits... it's in the name of science, okay?

Not that you can top this one, but there are other new Oreos on the drawing board: Delish noted that July will bring new Mint Chocolate Chip-flavored Oreos, inspired by the ice cream. In August, Oreo will boast a Maple Cream variety of the cookie, which will be a golden sandwich treat with a light maple-flavored cream inside designed to suggest the coming fall season.

NBC's Today added with yet another flavor, Oreo S'Mores, featuring marshmallow/chocolate filling and a graham cracker crust, will be an additional summer treat for fans to try, meaning there's basically a new Oreo for every palate coming up.

The new treats could also be used for educational purposes this summer. How about a camp out under the stars with the S'mores version? Or discussing discuss astronomy (astrology's fine too for those of us parents without a science degree) while examining the sky?

Use the Marshmallow Moon Oreos as the motivating snack for a summer unit on the history of the Space Race. I'm not kidding when I tell people I sugarcoat all my hands-on projects with the kids.