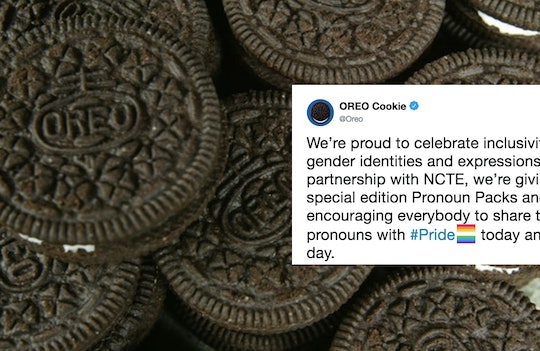 Every year when June rolls around, companies make it a point to support the LGBTQ+ community by selling rainbow merchandise. That's because June is unofficially Pride Month — a time to acknowledge and celebrate the spectrum of sexual and gender identities. Oftentimes, this merch gives back to organizations that actively contribute to these communities. But even when it doesn't, it's always nice when one of your favorite brands stands for love and equality. Well, one beloved brand just kicked things up a notch. Because Oreo's special edition Pronoun Packs celebrate ALL gender identities.

June 30 may have been the last "official" day of Pride Month — but Oreo closed out the month in an epic fashion. On June 29, the official Oreo Twitter and Instagram accounts teased, "We’re excited to announce we’ll be at World Pride 2019 in New York City tomorrow, June 30th! Celebrate with us at PrideFest, or go to our Instagram tomorrow to learn more about what we’re doing and follow along with us."

When Sunday rolled around, the company then revealed a special edition design that would be handed out to PrideFest-goers — and it specifically celebrated gender identities. "We’re proud to celebrate inclusivity for all gender identities and expressions," Oreo tweeted. "In partnership with NCTE, we’re giving away special edition Pronoun Packs and encouraging everybody to share their pronouns with #Pride today and every day. The three different packs — she/her, he/him, and they/them — have the pronouns written on the cookies themselves and feature pink, blue, and purple packaging.

The photo of the Pronoun Packs also included a muti-colored pin that looks like an Oreo cookie and reads, "Ask Me My Pronouns." Pretty awesome, right?

Instagram seemed pretty enamored by the idea. One Instagram user wrote, "I NEED THESE IN MY LIFE!"

Another person commented, "Seriously can y’all give away these pins to non attendees of nyc pride please."

Twitter seemed equality impressed by the Oreo Pronoun Packs. One Twitter user wrote, "Where can I snag that sweet Oreo button? And thank you for doing this. Mad props and good cookies! "

Another Twitter user commented, "She/Her! Please don't forget the community after Pride! Keep up the work!"

Yet another person chimed in with, "Yes hi hello I'm gay can i have some gay oreos."

Of course, there were also plenty of not-so-inclusive comments about Oreo's Pronoun Packs. But let's just focus on the positive, shall we? (Love trumps hate, and all the jazz.)

Unfortunately, it doesn't seem that these Pronoun Packs will be available for purchase in stores. In a response to a customer question via Twitter, the official Oreo Twitter account wrote, "These special edition packs are not available for sale. Rest assured, we will continue to offer new products that respond to the preferences of our consumers." So unless you were in NYC for PrideFest — or unless people decide to sell them on eBay — sadly, you won't be able to get your hands on a pack.

This isn't the first time Oreo has gotten in on the Pride Month love. Back in 2012, the brand posted an image of a six-layered rainbow cookie on Facebook, along with the message, "Proudly support love!" The post elicited a fair amount of criticism, according to Adweek. In fact, One Million Moms — along with many other groups — vowed to boycott Oreos over the Pride Month show of support.

Honestly, I'm loving the Oreo Pronoun Packs. But for the people in the back who insist there are only two genders or that the biological sex of a person is the only thing that defines gender, I'd like to point out: Misgendering someone is a big deal. A 2014 study published in the journal Self and Identity, found that 32.8 percent of transgender participants reported feeling very stigmatized when they were misgendered, according to Healthline. Not to mention, more than half of transgender male teens have attempted suicide, according to a study published in 2018.

So kudos, once again, to Oreo for supporting gender identity awareness during Pride Month. And thanks for giving me yet another reason to binge on your irresistible cookies.