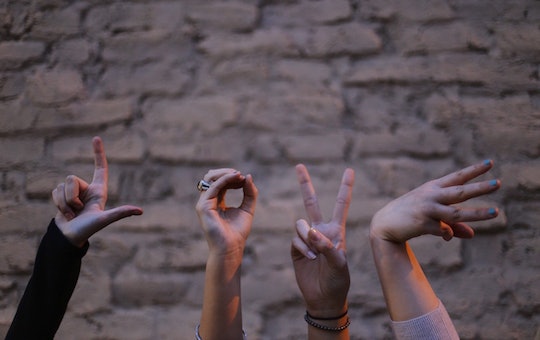 On Friday evening, President Donald Trump proclaimed the month of April to be Sexual Assault Awareness and Prevention month. And though Trump was not the first president to recognize it (it's been officially recognized since 2001), the irony did not go unnoticed. Trump, who has been accused of sexual assault by multiple women — though never convicted or charged — is not the finest figure to be advocating for people who have experienced something like sexual assault. But putting all irony aside, there is a way that you can be an advocate for those survivors by donating to organizations that advocate for victims of sexual assault — because we might might need them, but they need our help, too.

More than 10 women have accused the president of sexual assault in the past, according to The Daily Beast — and Trump's own words about allegedly groping women, which were caught on camera and shared across the internet in 2016, certainly didn't help his image (in the president's defense, he's never been criminally charged for any of the allegations against him). While these claims don't exactly make him a likely candidate to advocate for survivors of sexual assault, they do highlight the importance of bringing awareness to this major issue than affects both men and women, young and old, daily.

"As we recognize Sexual Assault Awareness and Prevention Month, we are reminded that we all share the responsibility to reduce and ultimately end sexual violence," Trump stated in the proclamation.

Whether he's being sincere or not, Trump is right in one respect: As he said in an official statement over the weekend, "we all share the responsibility to reduce and ultimately end sexual violence." A list of just some of the amazing organizations you can donate to, in order to do just that, can be found below.

PAVE is a charity that works to break the silence of talking about sexual violence and prevent sexual violence from happening through advocacy, education, and support. Their programs aim to reach students in high school, college, members of the military, and even those working in the entertainment industry. By donating to PAVE, you're helping fund these programs in addition to helping support survivors of sexual violence.

The Joyful Heart Foundation was started in 2004 by Law & Order: Special Victims Unit actress Mariska Hargitay, after her role opened her eyes to the violence that women were facing. Joyful Heart Foundation approaches sexual assault in three different ways — through healing, education, and advocacy. Donations to the organization go towards programs to help women heal from the trauma they've faced, educating others about sexual assault, and advocating for survivors at federal, state, and local levels.

Safe Horizon is a charity based out of New York City that aims to help victims of all violence — including sexual assault. Safe Horizon provides a hotline for women to call to receive support and aims to provide support, prevent violence, and promote justice by utilizing the donations made to the organization.

V-Day is an organization started by playwright Eve Ensler to end violence against women and girls — including sexual violence. V-Day channels 90 cents from every dollar donated towards ending this violence by creating PSA campaigns, and putting money into community based anti-violence programs.

NAESV is a non-profit organization that exists to provide the "missing voice" in the nation's capital for state coalitions and local programs advocating for survivors of sexual violence. Donations made to NAESV go toward helping advocators brief policy makers about sexual violence in Washington D.C. and help pay for research about sexual assault studies.

By donating to one or several of the above-listed organizations this month, you're not just helping survivors of sexual assault and abuse, you're firmly voicing your belief that, in 2017, language and behavior that furthers that violence — even if it comes from the man in the Oval Office — is unacceptable. It may not solve everything, but it's a start.