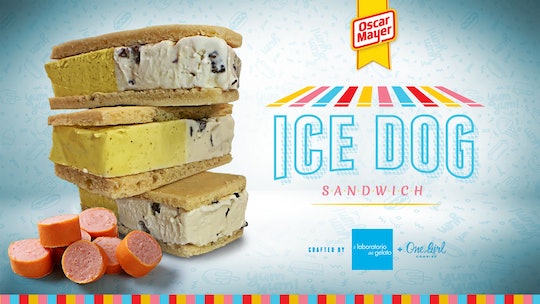 Guard your dessert spoons folks, the ice cream aisle is under invasion. Days after French's unveiled its Mustard Ice Cream, Oscar Mayer has introduced hot-dog flavored ice cream to the world with the creation of the Ice Dog Sandwich. No, this is not a joke. The Ice Dog Sandwich is a totally real, and totally bizarre, summer treat.

Oscar Mayer threw its dogs into the dessert game Thursday, with a tweet that appeared to challenge French's recent foray into ice cream. "Who eats just mustard @Frenchs?" the brand tweeted in reference to the condiment company's new Mustard Ice Cream. "Condiments were made for Oscar Mayer hot dogs. Say hello to the Oscar Mayer Ice Dog Sandwich." Oscar Mayer has described the Ice Dog Sandwich as featuring a spicy Dijon gelato paired alongside hot-dog flavored sweet cream that has been blended with candied hot dog bits (who knew it was even possible to candy a hot dog?). Two pieces of a "cookie bun" complete this, err, sweet treat.

While I'm willing to admit that I am indeed curious about what a candied hot dog might taste like, I'm thoroughly confused about why such a dessert needs to exist. According to Mashable, a press email from Oscar Mayer justified the Ice Dog Sandwich by saying, "A hot dog for dinner should be chased by a hot dog for dessert."

According to People, the overall flavor of the Ice Dog Sandwich is meant to resemble the taste of "an Oscar Mayer hot dog in frozen form." It was developed in collaboration with il laboratorio del gelato, a New York City-based ice cream company, in honor of National Ice Cream Sandwich Day, which falls on Aug. 2, People reported.

Unfortunately (or perhaps fortunately) it seems as if Oscar Mayer's Ice Dog Sandwich won't be immediately available everywhere. In a tweet posted Thursday, the company revealed that the official Wienermobile would be cruising around New York City and handing out Ice Dog Sandwiches throughout the week of Aug. 12. It's unclear if the dessert will be sold in stores.

Reactions to the Ice Dog Sandwich has been understandably a bit mixed. And I get it, really I do. I mean, the idea of hot-dog flavored ice cream is so odd it's actually intriguing. As one person tweeted, "Bacon milkshakes aren't bad. I'd try this once."

Still, while some on social media appeared open to the idea of at least sampling an Ice Dog Sandwich, others had harsh words for Oscar Mayer's latest food creation. "Have you lost your minds?" one concerned Twitter user asked in a tweet directed to Oscar Mayer. Oscar Mayer responded, writing: "NOPE. We are just some SERIOUS hot dog fanatic."

According to Oscar Mayer, those outside the New York City area who are brave enough to introduce their taste buds to hot-dog flavored ice cream and candied hot dog bits can send a DM to the company on Twitter for information about how to sample the dessert in their own state.