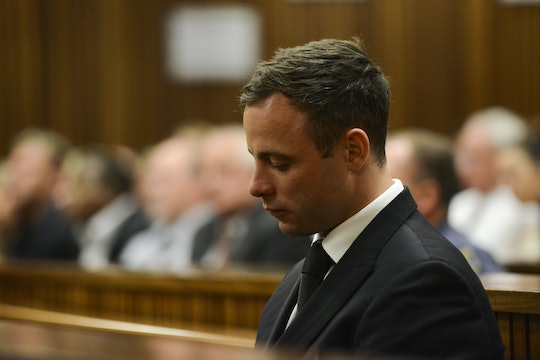 Two years after he shot and killed his girlfriend through his bathroom door, Oscar Pistorius has been convicted of Reeva Steenkamp's murder. The verdict overturns a previous manslaughter verdict handed to Pistorius, who was serving house arrest South Africa's Supreme Court of Appeal declared him guilty of murder.

So what does this mean for the once-beloved Paralympic athlete, who captured hearts at the 2012 Olympics? He could be facing at least 15 years in jail (the minimum sentence for murder), a stark difference from the five years in jail he faced following his culpable homicide verdict in 2014. (He had served one year in jail before being transferred to house arrest.)

On Valentine's Day in 2013, Pistorius shot and killed Steenkamp, an act that the athlete has always maintained was an accident. The athlete claimed he thought his life was in danger thanks to an intruder, something the Appeals Court was not sympathetic to. Instead, like the prosecution, the Appeals Court thought Pistorius should have realized shooting at the bathroom door would lead to the death of Steenkamp, or whoever he thought was inside.

A new sentencing date for Pistorius has yet to be set, but it seems he will indeed return to jail, despite the time already served. That said, the athlete can still appeal the verdict.

Steenkamp's family spoke out following the change in verdict, with the victim's father, Barry Steenkamp, telling press, "We can get on with our lives now."