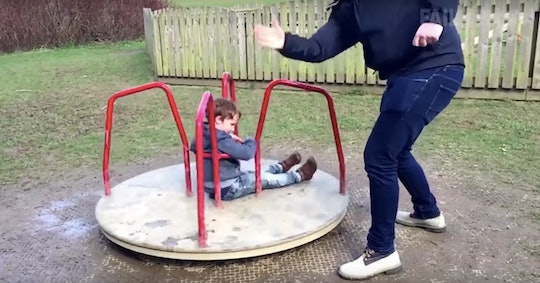 Viral Dad Fails Say A Lot About How We Parent

About three minutes into my first viewing of a “dad fails” compilation, I’m wondering when the groin shots will happen. Maybe I have been primed by that video of Michelle Obama hitting Harry Styles with a dodgeball, or just growing up with ‘90s sitcoms. Amidst the dads flinging their children down slip ‘n’ slides, dropping them in the surf at the beach, and losing their grip on a toddler, I realize what I’ve really tuned in for — watching a grown man eat it. Finally some poor dope takes a brave swing from a rope, headed for a murky lake and loses his grip, lurching instead headfirst and awkwardly, his 30-something body no longer elastic like a child’s. I have watched a grown man fall on his face, and I am satisfied.

But is this truly a “dad fail”? The genre of YouTube videos marked by a variety of accidental slips and drops of children rack up millions of views, presumably from people who are more invested in seeing children momentarily in peril. But unlike novels and movies where children are hurt or die (and I have lost my ability to read and watch those with the arrival of my son), these dad fail videos (“dadfails”) are a bit of controlled chaos. After all, we can be assured that if there’s video evidence, uploaded to the internet, the child in question was actually alright.

Take "Great catch! Airport security guard saves falling baby," a textbook entry in the dadfail genre, in which a feckless dad sets his baby on the counter on the far side of the x-ray machine to repack his backpack, and baby tumbles headfirst toward the floor. Crucially, the baby is intercepted by a security agent who enters the frame at 90 degrees to resolve the parental plot curve. The video neatly follows the dadfail recipe — hopeless dad + dramatic tension + satisfying and surprising resolution (no one is hurt!) — and went viral across news channels the globe over when it was captured by Polish CCTV in 2013.

One could argue that the ur-dadfail was actually the canon that made up America’s Funniest Home Videos. Beginning in 1989, the television show solicited videos of funny kids, funny pets, and above all physical comedy. Perhaps my waiting for the crotch shot in dadfails was borne of Sunday-night viewings, watching Bob Saget narrate clips sent in by VHS. Still in existence 30 years later, the show is now the beneficiary of the millions of videos we all film and store on our smartphones. In 2017, the long-term producer of the show noted its resilient popularity. “We have people who say they watched the show as kids showing up at the tapings with their own children," Vin Di Bona told the Los Angeles Times.

Instead of watching YouTube tank the show, they evolved to allow people to upload content and watched the popularity continue. Our appetite as a culture for these videos has only increased over time, from its humble beginnings as a lucky shot of one’s cat singing along to “Jingle Bells.” In 2007, a special called “Guide to Parenting” aired, launching the dadfail to national prominence.

It’s a dad attempting to bond with his child only to drop her into a lake.

Then, in 2014, the first staged dadfail divided audiences when comedian Roman Atwood pranked his wife into thinking he’d thrown his toddler child over a balcony. Lisa Suhay at Christian Science Monitor took a dim view of the man, writing at the time, “It feels as if Atwood is far from understanding parenthood because he’s still living at life’s kid’s table where he has prospered and provides for his family via monetized videos and merchandise sales.”

While many of the dadfail men don’t seem to profit, the clip seemed to mark the turn into an acceptance of potential harm coming to children in the form of YouTube videos. Perhaps it is important to ask who the audience is for these videos — if parents are watching and laughing, why?

As the millennial generation becomes parents, and many of us have, we are forced to reckon with the way we were raised. Unlike Gen X and the baby boomers, we can’t really wax rhapsodic about our time wandering the neighborhood alone for hours, cruising in the backs of station wagons with no seatbelts. Thirty-something parents came of age in the shadow of mysterious white vans, missing-child faces on milk cartons, and America’s Most Wanted. We may have been helicopter-parented ourselves, mothers and fathers buzzing near us as we completed homework and were carefully tucked into bed at night. Perhaps we’ve decided that it’s time for a revolution.

In our tightly controlled environments, we’ve now begun seeking opportunities for our children to fall and fail and skin their knees. It’s even better if we can give them the thrill and opportunity of temporary danger, all with a parent nearby. If it’s a dad attempting to bond with his child only to drop her into a lake, at least he’s nearby enough to fish her out.

Our concept of fatherhood has changed along with our generational expectations. In a 2007 Gender and Society paper about parental involvement, researchers Glenda Wall and Stephanie Arnold posited that, “Support for father involvement, to the extent that it exists, occurs within the framework of fathers as part-time, secondary parents whose relationship with children remains less important than mothers.” So while we may believe that a more balanced parenthood exists now, fathers are still the secondary caretakers, the “fun” one. Nothing sums this up better than dadfails. Surely somewhere in the background a mother is fretting and biting her nails, scheduling playdates while dad gets to play the guitar and toss baseballs at his daughter’s face, and be rewarded as an invested parent.

It is in play that some fathers find their greatest bonding opportunity with their children.

In a New York Times op-ed by author Darcy Lockman, interviews with parents seem to support this theory. Lockman notes that a lack of parenting parity could be accounted for:

“The first was that women take over activities like bedtime, homework and laundry because men perform these tasks inadequately. But this isn’t ‘maternal gatekeeping,’ the theory that men want to help but women disparage their capabilities and push them out. Instead these seem to be situations that necessitate the intervention of a reasonable adult.”

A reasonable adult is not the one slinging her child over her shoulder and dropping him, though she may be holding the camera.

While parenting through play is a widely acknowledged aspect of male parenting, this rough-and-tumble style may not be viewed as the same as a mother’s more careful interactions and management. Perhaps the dadfail video is a logical extension of play-based parenting, and as with all play, comes the decades-old maxim “Someone could get hurt.” Yet it is in play that some fathers find their greatest bonding opportunity with their children.

Researcher Theodore Ransaw looked at patterns of play among six African-American fathers in a 2017 article in Spectrum: A Journal on Black Men “Research also tells us that when fathers play with their children, biology kicks in and they want to engage with their children even more,” he wrote. “This is significant to parenting because research has shown that behavioral and emotional problems decrease and the positive educational outcomes increase when a father is more involved with his children.”

If play is a key component of a man’s parenting, potential for bonding could increase, even as the potential for harm grows. It is this chaotic, messy brand of investment in one’s children that is marking 21st-century parenting. Fathers have grown more involved, either through desire or necessity, and we are recording more and more of our lives with our smartphones. It was only a matter of time before these two phenomena collided, much like a drone to the face of a piloting dad (as seen in the 13th dadfail compilation I watched).

Yet all of this leads me to wonder one more dark thought: who are we allowing to fail? If we are still viewing mothers as the primary parent, then we can easily laugh at dadfails. Surely there was a more responsible woman keeping her eye on the situation! While many parents fall victim to the cult of the perfect Pinterest parent (usually a mother), the decades-old concept of the “good enough” parent may be making a comeback.

British pediatrician and psychoanalyst D. W. Winnicott proposed the theory of the good-enough parent in 1953, and failure is baked right into the concept. Winnicott proposed that, in order for children to thrive and grow into independent, resilient human beings, mothers need to fail them in small, manageable ways: “The good enough mother starts off with an almost complete adaptation to her infant's needs and, as time proceeds, she adapts less and less completely, gradually, according to the infant's growing ability to deal with her failure.”

What if, instead of being the mark of a careless parent, dadfail videos actually have something to teach us? While I ruminate over my choices in what I feed my son, how much sunscreen I apply to his chubby cheeks, there are other parents out there who are reveling in the fun of parenthood, one grainy iPhone video at a time. At my best, I am adhering to this “good enough” parenting that was pioneered in the 1950s (I’m not smoking cigarettes and drinking while pregnant, so I haven’t gone full retro). There is peace in the progress that Winnicott proposed, going from careful, every-second attention to a newborn to a more removed style as he ages.

And so I return to these videos, close calls and playground equipment malfunctions, and I find some tenderness for these dads. I hope to one day reach the kind of parenting zen where I can let my son take on higher jungle gyms without feeling my breath on his neck. We are all just trying to figure out the balance between safety, and safely letting our kids fail. We can only hope that when the latter happens, it’s recorded.