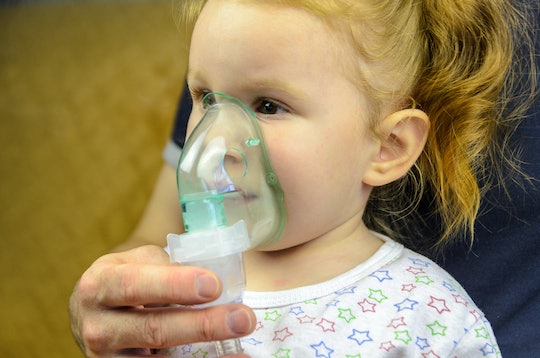 Our Kids Will Face The Most Climate Change Health Risks, New Study Finds

You've probably seen some heartbreaking photos of starving polar bears that warn of the impact of climate change, but animals aren't the only ones we're putting at risk when we don't make efforts to curb manmade climate change. Experts now say that kids will face the brunt of climate change health risks, ranging from contagious diseases to natural disasters. But it's not all bad news, as there is plenty that we — and they — can do to combat the changes.

A recent paper published in the journal Pediatrics reported that children will be the ones bearing 88 percent of the health burden associated with climate change, CNN reported. These risks to children mainly include increased risk of infectious disease and frequent natural disasters. Dr. Kevin Chan, chairman of pediatrics at Memorial University, head of child health at Eastern Health in Canada, and the paper's co-author told CNN that "We have already seen the impacts," pointing to major hurricanes like Harvey and Irma, as well as heat waves and the outbreak of new infectious diseases like the Zika virus, as examples of new risks.

Another major concern cited in the paper is the prevalence of deaths due to diarrhea, malaria and nutritional deficiencies — all of which Chan and his co-author Dr. Rebecca Pass Philipsborn, a member of the pediatrics faculty at the Emory University School of Medicine suggested can be influenced by climate change. Diarrhea and malaria are both more prevalent in warmer temperatures, with the World Health Organization predicting 48,000 additional deaths due to diarrheal illness alone among children under the age of 15 by the year 2030.

Along with risk of disease, extreme temperature changes and drought are expected to lead to crop failures, resulting in a projected 95,000 additional child deaths due to undernutrition by 2030, according to the WHO. Chan and Philipsborn also explained that children are generally more vulnerable to heat, droughts, and air pollution that adults.

This isn't the first time experts have warned the public about the risks of climate change to children. The American Academy of Pediatrics issued a statement in 2015 pointing to children's health as a reason to reduce carbon emissions and lessen carbon footprints, as well as promote energy efficiency, according to The Guardian. Former APA President Dr. Sandra G. Hassink said in a statement at the time that pediatricians in particular must voice their concerns:

Climate change is a rising public health threat to all children in this country and around the world. Pediatricians have a unique and powerful voice in this conversation due to their knowledge of child health and disease and their role in ensuring the health of current and future children.

But doctors aren't the only ones who must take action. Along with detailing the potential risks, Chan also called for real-time preparations for the coming changes. While large scale change is necessary, individual people are not helpless. Forbes listed a number of ways that you can do your part. Becoming a vegetarian or vegan, buying local, and regularly recycling are just a few examples of how you can help reduce your carbon footprint. Small changes make a big difference.

What's more, adults aren't the only ones who have a role to play in the fight against climate change. While you don't want to scare your child, taking the time to talk to them about climate change and the ways in which it will impact them is an important first step. National Geographic suggests that parents begin with instilling a respect for the planet in their children by talking about ecosystems and looking at pictures of natural beauty. They can also get involved in writing to their local representatives. Other tips include getting children involved in the recycling at home, as well as teaching them where their waste goes.

The impacts of climate change can be frightening, especially when it comes to the health of your children. But rather than freeze with fear, parents should follow Chan's recommendation and take comfort in knowing what they and their kids can do to make the world a better place for future generations.

More Like This
Banana Boat Sunscreen Has Recalled Products That Were Found To Contain Benzene
New York Can End Religious Exemptions to Vaccine Mandates, Says A Federal Appeals Court
9 Labor Day Weekend Getaways In New England That Are Perfect For Families
Gathre’s Winnie The Pooh Collection Is Finally Here