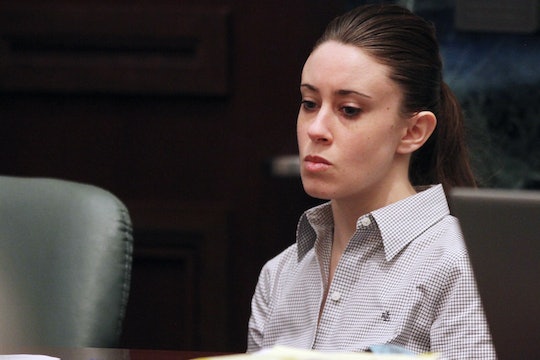 Our Obsession With Casey Anthony Needs To Stop

In light of recent allegations that Jose Baez, Casey Anthony's lawyer, reportedly slept with his client during her trial, mixed in with some paparazzi shots of Anthony buying a new car in Florida, Twitter is essentially freaking out about the notorious public figure. But our collective obsession with Casey Anthony needs to stop. It's time to move on. Anthony, who stood trial for the death of her daughter, Caylee, and was acquitted in 2011 of first degree murder, has received enough ogling all around. This most recent round just proves it's almost a holiday weekend and people need something better to do.

Just this past weekend, Anthony, 30, was spotted in West Palm Beach, Florida at a Ford dealership shopping for a new car. The Daily Mail made it clear that she was "smiling" and wearing flats and jeans and looking altogether, well, normal. Like she was moving on with her life. (The smiles and new Ford Escape were, unfortunately, ill-timed, as Anthony just filed for bankruptcy last month.)

Further compounding the situation, in recent documents filed with the court and obtained by People this week, Anthony's former private investigator, Dominic Casey, alleged that he walked in on Anthony and Baez post-coital on more than one occasion. Casey also claimed that the attorney allegedly told him that Anthony had confessed to the murder of her 2-year-old daughter, reportedly pleading with him to find the body before anyone else did.

Combine those two explosive headlines and it makes for a perfect media firestorm.

Baez has denied the allegations wholeheartedly, of course. He told People that he "unequivocally and categorically" denies any barter of sex for legal services with Anthony. He also said there was no sexual relationship between them in any other way. Baez also promised to pursue legal actions against Casey for making the libelous claim in the first place.

Twitter, as expected, has taken this bait — as it usually does, to the very extreme. People are still very, very mad that Anthony was acquitted by a jury (most of the backlash centers around wanting her dead, which is even weirder):

Others likened her to George Zimmerman, who was tried, and also acquitted, for the murder of Trayvon Martin (also in Florida):

Casey Anthony is not, obviously, the most sympathetic figure in the public sphere. But, depending on what you think personally about her acquittal, you should probably ask yourself before you tweet: what does this incessant shaming and harassment do? She was acquitted, fair and square. I don't like it either. I don't like that O.J. Simpson or George Zimmerman or Peter Liang were acquitted either.

But by tweeting about her and making her name trend again on social media in general, you're only bringing her more (strange, for sure) fame. And that's the opposite of progress. Even if you really, truly, deep-down believe in your social media heart that she is guilty. If she's the psychopath you really believe her to be, then it will come back to her. (Think about Robert Durst.)

The American justice system is not perfect, but the obsession with Casey Anthony has gotten totally out of hand. Let her file for bankruptcy and deal with these sex-scandal allegations on her own. Don't buy into her former investigator's claims and tweet incessantly about it. Let her drive a Ford Focus and wear an arguably bad chambray top. We have to let it go.

It we don't we're just obsessing over someone who is better left to the wilds of southern Florida. Tweeting GIFs about how much you want her dead won't do anything. Actually, it makes you just as scary as you think Anthony is. Let it go. It's time.