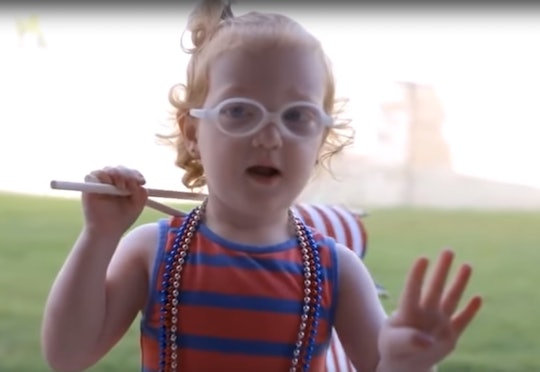 Who could resist having a mouthful of marshmallows? In the event that’s not possible, the next best thing is seeing an adorable little girl enjoying them for herself. Recently, OutDaughtered’s Hazel Busby ate a bunch of marshmallows and her dad, Adam Busby, documented the adorable endeavor on his Instagram Story. And the result will instantly make your day.

Hazel’s dad Adam shared the sweet moment on his Instagram Story on Wednesday night. In the second of the three clips, he asked the 3-year-old, who seemed just fascinated with the camera, “What are you eating?” Hazel came up with some word that’s unintelligible so he asked her again, “A what? Marshmallow? What did you say.” In another clip, he asked her, “Hazel, you ever played chubby bunny?” “Yeah,” she replied, before saying the magic words. Dad then prompted her to take another bite, which resulted in the cutest little “chubby bunny” from little Hazel.

As noted by In Touch Weekly, Hazel has been all over Adam Busby’s Instagram page of late. In a recent moment, she was helping her dad edit some video when she decided she’s rather do something else. “See you later alligator,” she said as she opened the door to leave, according to In Touch Weekly. Oh, my heart!

The Outdaughtered quintuplets are famous as the first all-girl set of quints born in the United States, according to ABC News. The show is on its third season now and the personalities of the little girls are really taking center stage, according to USA Today. Mom of the quints, Danielle Busby, commented that’s what she’s been most excited for fans to see. “Instead of being these little baby paperweights in the show…now they actually give input and they’re their own little characters! It’s super entertaining… To us, it’s absolutely hilarious,” she said, according to USA Today.

On TLC’s website, the network shares a little background on each of the quints and describes Hazel as a “fiery redhead” who is “perfectly happy in her own little world.” She can “pitch a fit” but she is “the sweetest quint,” according to TLC.

As the middle quint, it will be interesting to see how Hazel’s personality develops as she gets older. Not only will she be dealing the unique challenges that come from living with so many sisters — the Busbys also have a 7-year-old daughter — she has an eye condition that's required surgery, according to In Touch Weekly.

The white glasses Hazel wears aren’t just a cute accessory, they’re to help correct a condition called Nystagmus, which causes the eyes to make repetitive, uncontrolled movements, according to TLC. In Season 2 of the show, Hazel had surgery to help correct the placement of one of her eyes so that she wouldn’t need to turn her neck so far to see, as noted by TLC.

The surgery carried a 1 in 100,000 risk of permanent vision loss, according to In Touch Weekly, which would sound pretty safe to most of us. But dad Adam once admitted he was worried. “To most people that would sound like, ‘Man that’s pretty good odds. But then whenever you think of our situation, our chance of having all-girl quintuplets was 1 in 64 million. And so odds don’t really do it for us now,” he told In Touch. That’s a fair point.

Adam also admitted to the cameras on the show that as the smallest of the quints and one that deals with a serious medical condition, Hazel is a little bit special. In a video clip he said:

With her being my smallest baby, you’re a little bit more protective, I guess. She has this condition that the other babies don’t have and so you just kind of treat her a little bit different. You hold her a little bit tighter and you spend that little extra time with her and when she’s going through something like this, you want to take that pain away from her.

Adam faced his own medical struggle with postpartum depression, which was chronicled on the show. His therapist helped him see that he was actually pouring everything into trying to be the perfect parent so he wouldn’t have to deal with what he was feeling, as reported by People. "I’d be doing an extreme disservice to our fans if I hid this from the public and wasn’t honest with them," he told People. "I know I’m not alone and I want others to know they aren’t either. I want men to feel comfortable opening up about their feelings and expressing the struggles they’re going through. I want to help end the stigma surrounding mental health."

Needless to say, fans are happy to see that both dad and daughter appear to be having a great time now, as evidenced by their sweet encounter of "chubby bunny."