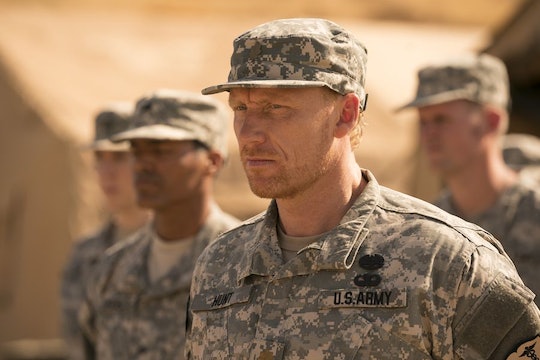 'Grey's Anatomy' Highlights How Controlling Relationships Can Be Found Anywhere

The new episode of Grey's Anatomy took fans back in time to Megan, Owen, Nathan, and Teddy's time in the army, and a lot was revealed but what many fans took notice of was Owen's controlling behavior toward Megan. In the past, Owen believed he knew what was best for Megan and that even seemed to be the case in the present.

In the flashbacks, Megan was excited about the opportunity to get a promotion, one she assumed her brother (who was higher ranked official), recommended her. Thus, she was shocked when she was passed over for the position and someone else, a man, got the job instead. At first, Owen pretended he didn't know why this happened, reminding Megan that the choice really came down to his superiors. However, as the episode went on, Megan (along with viewers), began to suspect that Owen was the real reason she didn't get the job. Unfortunately, it turned out she was right, though Owen still tried to deny it.

In the present, Megan was leaving to live in L.A. with Nathan and Farouk, who were already there in their new house. However, Owen didn't want her to go and was so adamant about her not leaving that he even got in the truck with her, pretending he was happily joining her for a "fun" road trip. It soon became clear that he really just wanted to try and convince Megan to stay in Seattle, believing that was the best course of action for her. You know, because he knows what's best for her.

Realizing this, Megan called Owen out for not recommending her for the job all those years ago. At first, Owen still tried to deny it, but then he finally admitted that he did it because he felt Megan wasn't ready for the job and that she still acted like a "child." This was totally offensive, because as the flashbacks indicated, Megan was more than qualified for the position and she deserved to get it. She was rejected simply because Owen didn't believe in her and felt he had the authority to control her life.

Similarly, he was doing the same thing in the present day by trying to get her not to move to L.A. He even threw the fact that Nathan had cheated on her in her face, making it out to be a reason why she shouldn't move and live with him. Thankfully, Megan called him out on his judgmental attitude, reminding him that he too had cheated on his first wife (Cristina) and then revealed that before Nathan cheated on her, she had cheated on him first. So apparently, while Owen spent years hating Nathan, he probably should've just gotten over himself, but that's a discussion for another day.

The point is, Megan is a grown woman and she knows what's best for herself and what she can and can't do. As she told Owen, moving to L.A. wasn't just about getting a fresh start, it was all she sometimes dreamed about while she was in captivity for those 10 years. She promised herself that if she ever got free, she would live by the ocean so that she could go to the beach whenever she wanted. And as she told Owen earlier, Seattle's beaches aren't that warm.

Even if Megan didn't have this explanation for why she wanted to live in L.A., she didn't need one. Megan is an adult and even though Owen tried to disguise his controlling behavior as caring, it was very out of line. Both what he did 10 years ago by interfering with her career and then trying to get her to stay in Seattle just so his mind would be at ease about her safety. Thankfully, Megan was smart enough and strong enough to put Owen in his place and make it clear to him that while she appreciates his concern, she's going to do what's best for her, no matter what. Her life is her own and no one else's. Period.