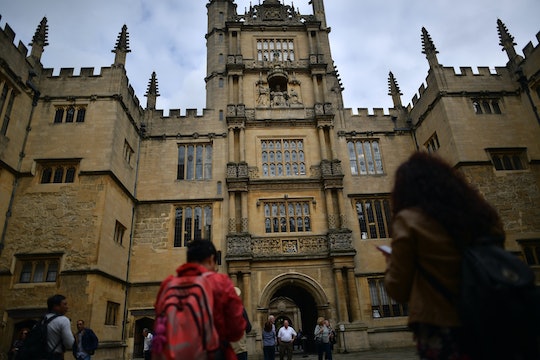 Despite the sobering prevalence of sexual assault on university campuses around the world, consent often seems simple enough: yes means yes, and no means no, right? Except the world's top-ranked university clearly decided this year that pamphlets and helplines aren't doing enough to stop sexual assault on campus. The University of Oxford introduced mandatory consent classes for all incoming freshmen this year, and despite the outraged reaction some students expressed, it's a move that deserves applause.

After being invited to a consent workshop last year, 19-year-old U.K. student George Lawlor wrote an op-ed for The Tab detailing why he found the move insulting. "I feel as if I’m taking the 'wrong' side here," he wrote, "but someone has to say it – I don’t have to be taught to not be a rapist. That much comes naturally to me, as I am sure it does to the overwhelming majority of people you and I know."

He posted the article alongside a picture of himself holding a sign that read "This is not what a rapist looks like." But the problem is — as sexual assault numbers show — consent is not as cut-and-dry as a shady stranger leaping out of the bushes to attack a stranger. And if students (such as Lawlor and plenty of others) believe that rapists look a certain way or that having "empathy, respect and human decency" alone are enough to stop rape, then they seriously do need consent classes.

The truth of the matter is, one in five women will be sexually assaulted at university. According to the Rape, Abuse & Incest National Network (RAINN), 23.1 percent of female undergraduate students and 5.4 percent of male undergrads have experienced sexual assault. Time reported that a full third of sexual assault victims in one study did not report their assaults because they weren't sure whether what they'd experienced was a crime or not, largely due to the fact that they'd been assaulted by partners or acquaintances.

A Washington Post-Kaiser Family Foundation survey found that at least 40 percent of students believe taking off clothes (which is not consent), getting a condom (also not consent), or nodding (not clear consent) indicates clear consent, and nearly half of the students surveyed were unsure whether sexual assault had occurred when "both people have not given clear agreement." 59 percent of students said sexual assault was unclear when "both people are under the influence of alcohol or drugs."

And while there's been little research into the efficacy of educating people about sexual assault and consent, one study did find that college-aged women who took a sexual assault prevention program (which provided information on healthy relationships, acquaintance assault, and how to outline personal boundaries) was effective: only 3.4 percent of the women in the program reported assault, compared to 9.3 percent of women in the control group.

An editorial introducing that same study, however, stressed the importance of involving an entire community in assault prevention, rather than only women. "With a public health approach, the most efficient way to have a population-level effect on violence is through a focus on primary prevention with potential perpetrators as part of a comprehensive, multilevel approach," wrote Dr. Kathleen Basile, lead behavioral scientist of the CDC's Sexual Violence and Child Maltreatment Team. "We can have a greater effect through combined efforts that also focus on potential perpetrators, bystanders, and broader community-level influences."

Personally, it sounds to me like a compulsory consent class in college might reach many of those people. Hopefully, the United States will learn from the example set by the University of Oxford and start putting information about consent in everybody's hands.