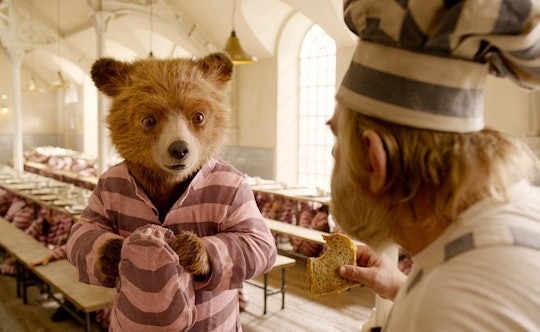 Paddington Bear Helps Me Live as an Immigrant

When I was 3 years old, I moved from my native Colombia to London to join my mother, who had been living there for almost a year studying medicine. As with any young mother who’s been apart from her toddler for more than a day, she had prepared everything for our reunion. Our apartment was filled with Batman figurines, Disney cassettes (remember cassettes?), and even Power Rangers-themed shampoo bottles. In our time apart, I’d started to learn how to read, so she also had every possible children’s book I could have wanted waiting for me. From The Very Hungry Caterpillar to Roger Hargreaves’ Mr. Men and Little Miss series, my memories of London are marked almost exclusively by the books my mom and I read together. One, however, was my favorite: Paddington and the Knickerbocker Rainbow.

I remember us reading this book in the park, at our small dining table, outside of Hamley’s toy shop, and at Paddington Station, of course. I doubt she could have predicted the impact this simple book would have on me. Perhaps it was indoctrination by repetition. I still remember, and my mother does a great job at reminding me, of how I demanded she read the story to me every night, and how every time it was over, I’d ask her to read it again. And again. And again. Over 20 years later, Paddington Bear has marked the way I deal with my own experience as an immigrant.

Considered a British treasure, Paddington is actually an immigrant. He hails from "darkest Peru," where he lived with his Aunt Lucy and his Uncle Pastuzo. Aunt Lucy sends Paddington to London in search for a better life after she moves to a home for the elderly. Paddington-the-bear makes his way to Paddington Station, where he meets the Brown family, who adopt the kindly bear as one of their own. The Browns end up calling Paddington by the name of the train station where they found him, hence the Anglo-Saxon pseudonym. He asks them to do so because no one seems to be able to pronounce and understand his Peruvian name.

In essence, Paddington’s stories are always about him trying to understand his new world. They often show him pointing out things he deems unjust or illogical in our society. Often, Paddington’s earnestness and ingenuity get him into trouble, but in the end his kind spirit and good heart always pay off.

Paddington loves his home and the Browns and that’s why he wants to fit in. He also loves Aunt Lucy and Peru with the same fervor. This is why he struggles.

In Paddington and the Knickerbocker Rainbow, Paddington and the Browns go to the beach on a stormy day. There, he sees a bald man and assumes that the wind must have blown his hair off, much to the bald man’s displeasure. The embarrassing faux pas and the rain force the family to take refuge in an ice cream parlor. There, Paddington sees a picture of a dessert called the Knickerbocker Glory. He craves it and, after debating with Mr. Brown, who says that it is certainly not the time for ice cream, they come to an agreement: Mr. Brown will purchase the ice cream only if Paddington can read and pronounce its name. Through perseverance, the young bear is victorious. As he eats his prized ice cream, the sun comes out again. The day is saved. Paddington is always victorious because in his world, kind-heartedness and perseverance always win.

The plot of this and every other Paddington book sums up what immigrants all over the world feel every day. An earnest desire to fit in and the struggle that comes with it. Immigrants are defined by an often uncomfortable, often confusing, always livening mix of two places you love: where you come from and where you’ve gone. Paddington loves his home and the Browns and that’s why he wants to fit in. He also loves Aunt Lucy and Peru with the same fervor. This is why he struggles. Paddington knows two worlds, but his knowledge of both is incomplete. But in his storybook world, his struggle is always met with understanding. This is what I think made Paddington’s story so appealing to me as a 3-year-old and what makes it so appealing to me now. Seeing an outsider mess up because of his condition as an outsider is something we relate to. Seeing the people who have to deal with him react with understanding is the storybook ending we hope for.

In a world where immigrants are vilified, Paddington reminds us that we're allowed to be angry at injustice, but that it is important to remain positive. To love and to find the goodness in those around us, because if we do, they will understand. I think of my mother when my friends mispronounce the last “e” in Felipe. Because she named me, and because by reading these books to me, she taught me to see the good in others. To know that they may not be able to pronounce my name, but they will try their best to understand.

More Like This
The Best Halloween Family Pajamas To Match Your Boos
I’m A Mom Who Will Never Own A Home
Home Reno Culture Makes Me Feel Like I Live In A "Before" House
I’m Getting Dual Citizenship For My Jewish Children, Just In Case.