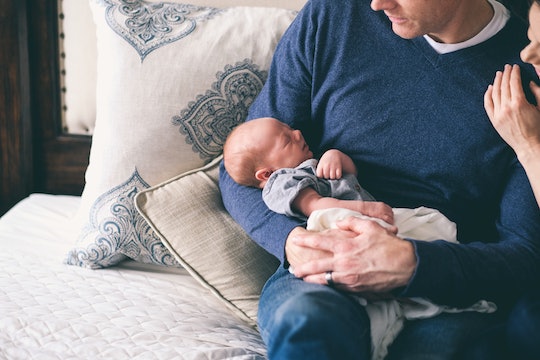 There are many benefits to paid parental leave, from reductions in infant mortality rates to improvement in overall mental health in mothers. And now, a new study from Germany adds one more reason to advocate for leave. Turns out that paid leave changes societal views on gender norms, according to the researchers. Giving mothers and fathers the financial freedom to stay home for a bit with their babies doesn't just help the immediate family — it could lead to greater gender equality in society as a whole.

The study on parental leave and gender norms, which was published in the Institute of Labor Economics, looked at the broader effects of a policy in Germany that dramatically increased the number of men who took parental leave. Just how dramatic was it? The policy was introduced in 2007; In 2006, about three percent of fathers took parental leave. By 2012, that number was up to around 30 percent.

The study authors compared grandparents whose sons had children before the policy went into effect with grandparents whose sons had children afterwards on how strongly they agreed with the statement, "Women should be more concerned about their family than about their career." They found that grandmothers whose sons became fathers after the policy went into effect (and thus were more likely to take parental leave) were less likely to agree with the statement.

Grandfathers showed the same trend, although the data was not statistically significant.

This could have huge implications. As the study authors wrote,

These results provide evidence that the formation of gender role attitudes is not finished at a certain age. Moreover, attitudes towards gender roles are not only transmitted from parents to children but also from (grown-up) children to their parents.

If fathers are able to stay home as well as mothers, it's not just that their babies will grow up with a more equal sense of gender roles. People who view the changes from the outside are also likely to start viewing gender roles with new eyes.

Soon, people in the United States may be able to get in on these paid parental leave benefits too. President Donald Trump's proposed budget is reportedly set to include six weeks of paid family leave for mothers and fathers, although it unfortunately also includes big budget cuts to things like education, so it's unclear how positive the net effect will be for families.

But the news out of Germany is hopeful for all those who value equality between the genders. Change is possible — and it can happen more quickly than you think.