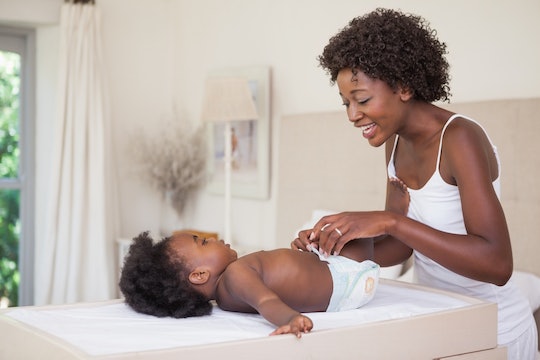 It's no lie that when both mothers and fathers whose companies provide them with ample paid parental leave, they're able to spend quality and irreplaceable time with their newborns. But, as new research has found, longer leave also provides children with educational benefits later in life. But, paid leave is only beneficial to some families, as The Guardian reported.

In fact, the study found that children born to highly educated, middle-class families gained "large and significantly positive effects" with regards to exam results later in life if their parents took longer periods of paid leave, according to The Guardian. The same can't be said for children born to poorer families with lesser educations. This means that paid leave isn’t an end-all solution — it won't help everyone until we address systemic racism, sexism, and income inequality.

The research by Natalia Danzer, the deputy director of the Ifo Centre for Labor and Demographic Economics, and Professor Victor Lavy of Warwick University, was published in the February issue of the Royal Economic Society Journal and offers the first concrete results on how parental leave can actually affect children’s cognitive development. It was the first of its kind to explore the effects of extended maternity leave on long-term education results, Danzer said, according to The Guardian.

"The striking thing when we looked at individual groups was the significant difference that depended on the educational background of the mothers," Danzer said, according to The Guardian.

The researchers used data that was collected after Austria decided to extend paid leave from one year to two years for children born after June 1990, according to the Daily Mail. While the data came from Austria alone, the researchers felt that the levels of income and education in Austria's population were similar to most other developed countries, so the findings were still deemed relevant elsewhere. The team compared the educational outcomes of children born before the start of the new policy and after it, using results from exams taken 15 years later.

There was no overall effect on children’s results when parental leave was extended from one to two years but, that said, there was indeed a strong divide among parents based on their levels of education, according to the Daily Mail. When parents with higher levels of education took longer paid leaves to care for their children, those children (especially boys) scored better in exams later in life.

But the study's results suggested that, as The Guardian explained, "parents with no post-school education, longer maternity leave equated to lower results in exams taken by their children as teenagers." The researchers believed that the negative effects for children of parents with lower education levels "might be caused by reduced time and material resources," partially because those parents left shorter gaps between pregnancies, according to Working Mother.

Most developed countries offer an average of about one year of maternity leave, which is up from 17 weeks in 1970, according to Business Insider.

In fact, the United States is still the only "industrialized country" that does not offer all citizens federally mandated paid family leave, CNN reported. About half of EU member countries offer maternity leave of at least a year — and sometimes even more. According to the U.S. Bureau of Labor Statistics, just 14 percent of civilian workers had access to paid leave last year, mostly thanks to state laws or progressive employers.

But this new research suggests that, even if the United States did take a step forward to mandate long paid leave for mothers and fathers alike, it's not enough. Families need more than time. They also need access to family planning services and free contraception, according to the World Health Organization (WHO). Family planning reinforces people’s rights to determine the number and spacing of their children. Additionally, it helps empower people and enhance education, WHO reported:

Family planning represents an opportunity for women to pursue additional education and participate in public life, including paid employment in non-family organizations. Additionally, having smaller families allows parents to invest more in each child. Children with fewer siblings tend to stay in school longer than those with many siblings.

It is critical that family planning is both available and accessible through midwives and other trained health workers to anyone who is sexually active, WHO suggests.

Likewise, contraception is critical. But a total of 214 million women of reproductive age in developing countries who want to avoid pregnancy are not using a modern contraceptive method. That's largely because of limited choice of methods; limited access to contraception, particularly among young people, low-income people, or unmarried people; fear or experience of side effects; cultural or religious opposition; poor quality of available services; users and providers bias; and gender-based barriers, WHO reported.

Higher wages in hourly jobs would, too, help support growing families. Research has shown that increasing the minimum wage would lead to happier, healthier and more successful children due to "decreased stress levels, improved relationships, and stronger chances of upward mobility," according to First Focus.

Only after all families are given access to all of the above, devoid of the systematic barriers that too often hold some back, would they be able to reap all the benefits of paid leave.