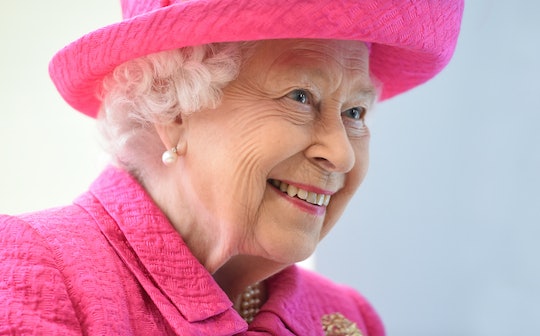 Not many people can say they've spent a night in Buckingham Palace, but one girl's toy monkey certainly can. While on a trip to the United Kingdom, a 5-year-old girl visiting from Australia accidentally left a beloved toy inside Buckingham Palace. But don't worry — the palace returned the girl's missing monkey toy once the pressing issue was brought to the Queen's attention.

Savannah Hart, a kindergartener from Adelaide Hills, Australia, was given the opportunity to take one of her school's beloved toy monkeys, named Harriet, home with her for the summer, according to People. So when Savannah and her family went on a trip to the United Kingdom and visited Buckingham Palace, Harriet came with them, of course. And as you do when visiting Buckingham Palace, Savannah had her photo taken. But when she set Harriet aside, the 5-year-old accidentally left her toy behind in the famed palace.

"The next day we were on a tour bus and I just had the thought and said, 'Where's Harriet?'," Savannah's mom, Katie Hart, told Seven News.

And this began the great adventure to find Harriet. Upon learning about Harriet's extended trip to the U.K., teachers and students at Savannah's school wrote a letter to the Queen, asking for her return, according to the Daily Mail. They also made sure to include photos of Harriet at Buckingham Palace so staff members could identify her.

As you might expect, the letter they wrote to the Queen is so sweet and very formal. "One of our monkeys, Harriet, recently visited Buckingham Palace with one of our little girls, Savannah," the letter read, according to The Daily Mail. "Unfortunately, Harriet was left behind in the Activity Room on the 13th August, 2019. Savannah's mother did contact palace staff and leave her name and email address in case she was found, but to date we have not heard from Harriet."

The letter continued, "Our children would dearly like her to return to Woodside to share her adventures. Could you please look in the Activity Room to see if she is still there?"

It took the palace staff just one week to find the lost monkey and respond back to the children at Savannah's school, according to The Advertiser. But before heading back to Australia, Harriet had to tend to some royal duties.

In a letter written to the students, staff members at Buckingham Palace revealed that the monkey had been found "hiding in the sheds behind the Family Pavilion, drinking our tea and eating scones", according to The Advertiser. Palace staff sent photos of Harriet's new adventures to the school along with the monkey herself, a book for the preschool library, and a toy corgi named Rex.

"We aim to give every visitor to Buckingham Palace a memorable experience, and after we found Harriet the monkey near the Family Pavilion, she spent some time helping out the Visitor Services team before heading home," a spokesperson for the Royal Collection, told People. "We hope Harriet enjoyed telling Rex the corgi about her adventures on the journey back to Australia."

And it sounds like Harriet's adventures were a little too exciting for one monkey to handle. The director at Savannah's school, Robyn Herringer, told The Advertiser that Harriet the monkey will be retiring from the school after visiting the Government House next month. Makes sense — you can't really top the exciting adventures Harriet had at Buckingham Palace.