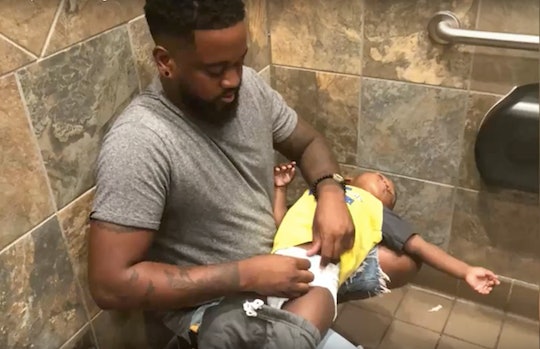 Times have changed, and the distribution of childcare has leveled out between parents. Whereas gender roles were pretty firmly intact just a few decades ago, today, fathers caretake as much as mothers, mothers earn income as much as fathers, and we're increasingly more tolerant of those who don't fit within that binary at all. However, in response to an infuriating photo that went viral, Pampers will install 5,000 baby changing tables in men's restrooms to accommodate for hands-on coparenting.

If you've ever, uh, been in a public restroom at pretty much any establishment, you've probably already noticed that the changing tables — the pull down plastic surfaces on which babies' diapers can be changed and cleaned — are exclusively available in women's restrooms. This is likely because women were the primary caretakers for so many years. However, times have changed, and it's raised an essential question: What are dads supposed to do if they're out with their children, and have no way to change them?

Donte Palmer was one such dad who found himself in that predicament, and had a photo taken of himself uncomfortably changing his son while squatting against the wall. According to Thrive Global, the Florida native's post sparked the #SquatForChange movement, which advocates for changing tables in both restrooms.

Pampers, one of the best-known diaper manufacturers to date, heard the call and decided to take action and the company will begin installing thousands of baby changing tables in men's restrooms across the country — totaling 5,000 — as part of its “Love the Change” campaign, according to a company press release. The goal is to focus on cities, like Cincinnati, Dallas, Detroit, and Philadelphia that lack changing tables in "high-need public locations." The partnership is happening in collaboration with Koala Kare, which manufacturers baby and children's furniture and accessories.

The initiative has already begun to receive celebrity support, with Pampers endorser John Legend teaming up for the cause. "Most dads have been there: you’re out with your kids & there's no place to change their diaper," he wrote in the caption of a video announcing his involvement in the project. "In honor of Father’s Day, @PampersUS is providing 5,000 Koala Kare changing tables in public restrooms. Finally, no more diaper duty on your lap!"

Executives at Procter & Gamble, which owns Pampers, weighed in sharing their understanding and concern that the lack of changing tables could hinder a father's ability to take his child out and/or bond with them. As Andre Schulten, Vice President and General Manager Baby Care North America, Procter & Gamble, said in a statement:

We know that dads want to be able to bond with their children by taking them out and about, and that means the inevitable diaper-duty no matter where they are. In many instances today, instead of it being an easy, straightforward task it’s a moment that causes angst because the facilities needed are not always available. We are proud to announce our commitment to provide 5,000 changing tables for installation in public restrooms by 2021 to help address the inequality hands-on dads face when it comes to taking care of their babies.

This is a step distinctly in the right direction, not only for making fathers' lives a bit easier, but also for the clear message it sends: parenting in 2019 is becoming increasingly more progressive, and outdated gender roles are a thing of the past. And it seems to be a message that's cohering in the public consciousness — one changing table at a time.