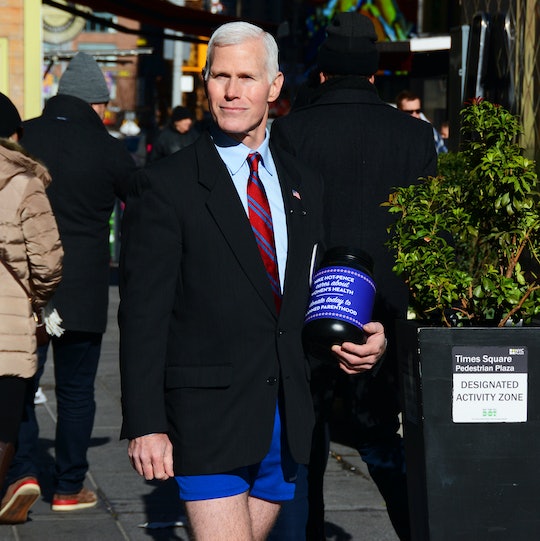 If you've been in New York City lately, perhaps you've seen him — Vice president-elect Mike Pence, pantless and in short shorts, collecting money for charities like Planned Parenthood. Was he so changed by his encounter with the Hamilton cast that he lost his trousers and found his moral compass? Unfortunately, no, although the truth itself is nearly as great: The Mike Pence roaming around Times Square is a look-alike who decided to use his relevant resemblance for good.

When Glen Pannell, a New York City-based graphic designer, actor, and director, kept hearing that he looked like Donald Trump's second-in-command, he knew he'd found his Halloween costume. But, fearing that a straightforward suit and tie lacked creativity, he decided to respect the time-honored costume tradition of sexing stuff up. Plus, as he told Romper via email, "Every time I said 'Sexy Mike Pence' out loud, it made me laugh." Thus, Mike Hot-Pence was born. (Full disclosure, I know Pannell personally, and he is as lovely as you'd expect from his Pence-related activities.)

I emerged from a three-week, Facebook-enabled depression brought on by the election. I needed to do something and I wanted it to have an immediate impact. And that’s when I got the idea to bring back Mike Hot-Pence, because it had gotten so much attention on Halloween.

So he set up a Twitter and a Facebook page with the help of some tech-savvy friends. Then, he headed to Times Square, and started raising money to donate, focusing, he told Romper, on "causes and groups that might be especially vulnerable under a Trump-Pence administration."

First on the list? Planned Parenthood. Pence is notable for his abysmal record on reproductive rights. (Reminder, he wants to consign Roe v. Wade "to the ash heap of history," and he pushed one of the most conservative anti-abortion laws in the country while governor of Indiana.) People all over the country concerned with women's health and reproductive freedom have been donating to Planned Parenthood in Pence's name since the election, and Pannell joined their ranks, albeit taking the whole "in Pence's name" thing more literally than most. On his first day out collecting, he raised $171.21.

Pannell has also collected for the Natural Resources Defense Council, and plans to add more organizations to the list. He told Romper,

This weekend, I’d like to collect for The Trevor Project, an organization that provides crisis intervention and suicide prevention services to lesbian, gay, bisexual, transgender and questioning (LGBTQ) young people. I’m especially passionate about this charity since my own coming out as a gay man in my early 20s was so difficult. And Mike Pence’s abysmal record on LGBT issues is not making it any easier for young gay men and women to come out.

So far, the reaction has been mostly positive. Pannell has met everyone from a cab driver "who stopped traffic to hand me a few bucks through his window in support of women’s health," to a resident of Chevy Chase, Maryland who recently (begrudgingly) welcomed Pence to the neighborhood, and was happy to add some money to Pannell's jar. On the flip side, Pannell said, "There was the woman who smiled at me and whispered, 'You’re a disgusting pig.' But you know what? That remark made me stay out an hour longer."

While Pannell knows he has a unique genetic opportunity, he told Romper,

So, get to CrossFitting, scrapbooking, or whatever floats your boat. And in the meantime, follow Mike Hot-Pence on Facebook and Twitter to stay apprised on his collections (and also to find out how he will protect his bare legs in the winter).