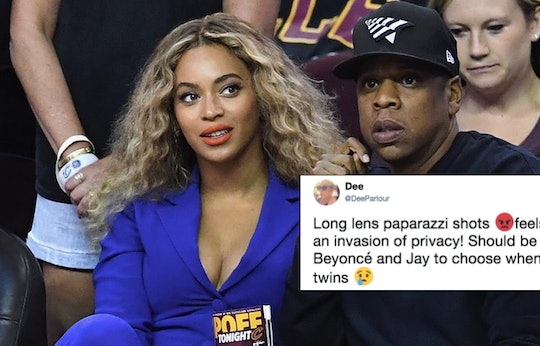 Even if you don't have a Twitter account, you probably already know that paparazzi photos of Beyoncé and JAY-Z's twins have leaked online. But what you might not know, but may very well agree with, is how messed up that is. As exciting as it is to see Sir and Rumi's adorable little faces and know that the family is doing well, the fact that the photos were shared by the paparazzi and not the family qualifies them as a serious breach of privacy — and many people seem to agree with this.

To be clear, Beyoncé and JAY-Z have not released any photos of their sweet little babies since Bey's famous Instagram post in July, marking the one month anniversary of their arrival. But that all changed on Saturday when photos of the twins surfaced, along with glimpses JAY-Z's mom Gloria Carter, Queen Bey, and her mom Tina Lawson who were all reportedly on vacation in Miami. Yes, many were understandably overjoyed to see the twins' adorable, squishy little faces and, of course, get a glimpse of their royal mommy as well. But not everyone was a fan of the way that they were taken and released.

"I’m sorry I find this creepy, sort of an invasion of privacy, if Beyoncé wanted them to be seen she’d have done it, I hate pap photos like this," one commenter of a BuzzFeed article pertaining to the photos pointed out. "(Don’t @ me 'but she’s a celeb' that doesn’t make it right)"

Many on Twitter echoed those same concerns, with the primary complaint being that these shots were an overwhelming invasion of privacy. Really, despite how exciting the idea of seeing a new glimpse of Bey's babies might be, people were not OK with the idea of paparazzi lenses peeking into a private family vacation for the sake of a few photos.

Others raised the issue of headlines suggesting that Beyoncé willingly showed the babies off the public. Terms like "revealed" and "shows off" touched some nerves with many people — and for good reason.

There were also a few people who worried about how Bey would respond to seeing her children plastered all over the internet, presumably without her consent. Some even suggested that she would be "pissed" about the photos.

Suffice it to say, it looks like they were right. The Grapevine reported on Sunday that the images are being deleted almost as quickly as they were posted. While there is no outright confirmation of it, Twitter seems to believe that Beyoncé is the one behind their removal — and they are down with it.

Whether Beyoncé is indeed behind the removal of the photos or not, she has every right to want to control how much access her children have with the public. The difference between her Instagram post and the recently released snaps is the level of consent. There is no reason to believe that Bey even knew the photos were being taken, much less that she was the one responsible for them being shared to tabloids.

No matter how public of a presence a celebrity has, they have just as much of a right to privacy as anyone else — especially for their children who have not had a chance to decide whether they want to live in the public eye. Rather than feed into a system that drives paparazzi to intrude on a famously private family, I would urge fans to have enough respect to wait for Queen Bey herself to release new photos of the twins. And as any Bey Hive member knows, it'll be epic when it happens.