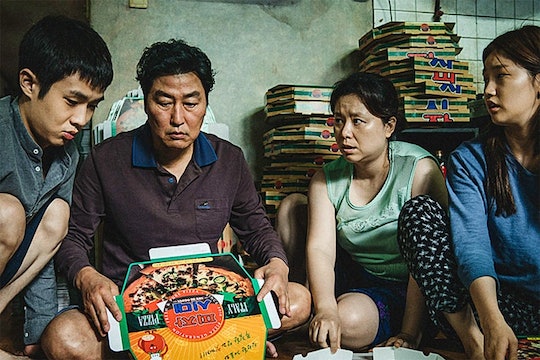 The Kim family in their WiFi-less hovel, shortly before infiltrating a wealthy family. Madman Films

The Cult Korean Film That Asks: Should We Eat The Rich?

If Snowpiercer changed the way you look at traveling economy-class in the air forever, Parasite will change the way you glance up at the big house in your neighborhood. In his first all-Korean production in a decade, writer-director Bong Joon-ho focuses in on the life of two families — one rich, one poor — and how they come to be entwined.

Parasite opens with a distilled scene of contemporary desperation: the Kim family have lost their WiFi because of unpaid bills. The brother and sister of the family, young adults, scramble around their grungy underground apartment trying to locate a neighboring network they can pick up. They screech with victory when they locate one — the catch is, it only works right next to the toilet.

Meanwhile, their parents nap listlessly on the floor. No room for furniture, or no money? The symptoms of debilitating depression? The scene suggests the answer is all of the above.

The Kims are about to experience an upgrade well beyond the neighbor’s internet access. Through a more pulled-together college friend, the son of the family, Ki-woo (Woo-sik Choi) gets a tip on a tutoring job with a wealthy family. Although Ki-woo has long since dropped out of school because of the family finances, his friend assures him it’s easy to forge not just his credential but the look and feel of a successful college student. Hesitant at first, Ki-woo not only secures the position, but quickly becomes romantically involved with the teenage daughter he’s been hired to teach. From there he sneakily inserts his other family members in various service guises such as chauffeur and housekeeper. His employers, the Parks, are so self-centered they never notice they are dealing not with independent contractors, but an actual family like their own.

We quickly glean that the wealthy Park family is as indiscriminate in their hiring as they are dependent on help in every aspect of their lives. Father Dong-ik is largely absent, engrossed in his duties as CEO of a successful tech company. The mother Yeon-kyo seems to live in a clueless, protected bubble. In every practical area of their lives, from raising their children, to providing emotional support, to moving them from place to place, and cooking and cleaning, the Parks pay for an nearly effortless existence, and don’t look too closely as long as it hums along smoothly. Unlike the leering fat cats of Snowpiercer, the Parks are never cartoonish or villainous. They simply believe they are different, and better, than the people they employ. (Mr. Park speaks obsessively about servants never “crossing the line” between them.)

The Parks' sense of entitlement, it seems, makes them an easy mark.

One strange thing about the new film Parasite is how it manages to seem both utterly hilarious and downright grim at the same time. But perhaps that’s just the flavor of the times? Long a superstar of Korean cinema, writer-director Bong Joon-ho is known for splashy reworkings of such well-trod genres as the murder mystery, the monster movie, apocalyptic sci fi (Snowpiercer is a cult favorite), and kid-friendly animal pictures like the vegetarianism-inducing Okja (As a side-note, both Snowpiercer and Okja are currently available on Netflix.) Even though the title Parasite suggests a horror story, Bong’s new film defies easy labels. It combines elements of all the genres he’s worked in previously while also being notably subtler and more realistic.

Parasite has been called a dark comedy, and it’s true, the early portions of the film dealing with the Kim family’s transformation from n’er-do-wells to motivated con-people, are frothy and fun. Ki-woo’s sister, Ki-jung, proves to be a much quicker study in parasitism than her brother: she takes one look around the expensive modernist palace and upgrades her position from simple tutor to “art therapist” — a job, needless to say, requiring much steeper fees.

The Parks' sense of entitlement, it seems, makes them an easy mark. When Ki-jung pitches Mrs. Park on how special, how fragile, her young son is, she has hit the sweet spot. Teasing out the story of how he has been traumatized into near silence by seeing a ghost (we’ll find out more on that later), Ki-jung is able to insert “some bullsh*t she read on the internet” about art therapy to present herself as the child’s only hope for a cure.

We get the same sense of escalating, almost drunken hilarity as in depression era screwball comedies like My Man Godfrey (1936), where a bum is transformed into a society butler. We get the concomitant criticism of the rich, as well. When presented with actual trauma, as when her servants are displaced by flood to an emergency shelter, Mrs. Parks’ only concern is why their clothes are mussed. As these details suggest, the film becomes increasingly grim as it follows the shaky, illusory relationships between the two families (and the class gulf between them) to their inevitable collapse.

Bong is very good at capturing the texture of privileged yuppie life, which seem to have a uniform global hue. The son of a designer, Bong had the film’s modernist show-case built from scratch, as he did the Kims’ underground hovel. While both sets are brilliant, the tranquil, tasteful Park place truly becomes a character of its own. It also appears in the poster for the film.

“Nearly 90 percent of the story takes place in a big house, the home of the rich family. It has a vertical structure — second floor, first floor and basement,” Bong said at the Cannes film festival, where Parasite picked up the Palme d’or last May, the first Korean film to ever do so. That basement space will become important as the film's comedic tone gradually darkens. What forces are being unleashed by the widening gulf between the rich and the poor, by the vast majority of people forced to live underground lives, by the merciless extraction of value? What happens when economic anxiety springs to life? These are questions that have long troubled Bong.

In some ways the house is granted more depth than any of the human characters: we get a flashback of its former life when occupied by its famous architect. The architect, we learn, built it as a haven for his own life and work and lived there for many years. The Parks were drawn to it not only as a status symbol, but also as an embodiment of “the artistic spirit.” Ultimately, Bong’s artistry is radical: like the house he constructs, it has hidden spaces, dark recesses, and revolutionary aims.