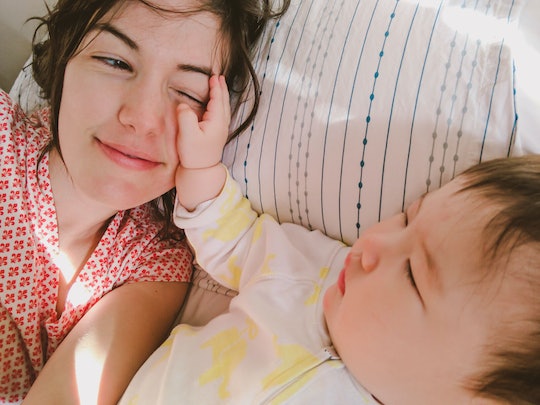 Parents Are Chronically Stressed. Free Child Care Would Change That.

When I stayed home for six weeks with my infant daughter, I marveled at how an 11-pound creature who didn’t yet understand she had arms could leave me so thoroughly bemused and bewildered. All parents could certainly benefit from access to more resources like workshops, or perhaps magic potions that make babies sleep through the night. The most impactful thing we can do, though, is reduce parents' levels of chronic stress. That’s where universal, zero-cost child care comes in.

There is a significant body of research that shows parental stress can have a negative and lasting impact on children. It’s the shadow side of attachment theory — highly stressed-out parents are likely to be unpredictable or non-attentive, and this leads to insecure attachments among youngsters, which starts a negative cascade. At worst, epic levels of ongoing stress can spike the risk for neglect, abuse, divorce, or other traumatic events that make up a category researchers call Adverse Childhood Experiences, or ACEs.

Stress can also impact babies before they’re born — the stress levels in both parents’ bodies pre-conception, and in the mother’s body during pregnancy, influence fetal development. As explained by Dr. Michael C. Lu, former director of the U.S. Department of Health and Human Services’ Maternal and Child Health Bureau, it’s an evolutionary way for fetal brains to know whether they’re preparing to enter a harmonious environment or a dangerous one. So, while we don’t want any caregivers highly stressed, it takes on special importance among parents because of their unique emotional and physiological bonds with children.

Before the parents reading this start sweating with shame, please know that what we’re talking about here is sustained, high-level stress — “toxic stress.” This is not about the occasional day you (and I) lose our head and scream at your (my) kid because you’re on edge thanks to a big project at work or the car starting to make a disturbing clunking sound. The classic neuroscience truism is that neurons which “fire together, wire together” — in other words, our brains learn through repetition after repetition after repetition. There are also two pieces of good news: first, the brains of young children are very malleable and can quickly recover if their circumstances are changed; and second, the presence of other stable, loving adults can act as a buffer against toxic stress. Harvard’s Center on the Developing Child is very specific about the definition of toxic stress: “Prolonged activation of the stress response system in the absence of protective relationships.”

If a parent is cycling through chronic stress-related depression and anger, the child’s brain gets confused.

Still, the best and easiest way to avoid toxic stress is to support parents (and for parents to give themselves permission to set boundaries, knowing this is actually helping their children).

If parents are generally warm and loving and safe, a child’s brain can easily absorb a bad day; the child is accustomed to the occasional “rupture and repair.” However, if a parent is cycling through chronic stress-related depression and anger, the child’s brain gets confused: it’s unclear if adults are safe, it’s unclear if needs will be met. This insecure attachment can lead to maladaptive behaviors — logical but unhelpful — like acting up (throwing a tantrum or a chair) to get attention, or withdrawal (why bother asserting a need if it won’t be met?).

I want to say explicitly, by the way, that these parents do not love their children one iota less than anyone else, nor are ACEs deterministic. Toxic stress is a health condition; as we all know from times in our lives we’ve been acutely stressed, a brain flooded with cortisol has an extraordinarily powerful gravitational pull against our better angels. Also, many stressed-out parents were themselves recipients of ACEs as children, which leave both scars and heightened risk factors; another truism is that even among infants and toddlers whose long-term memory hasn’t yet kicked in, “the body remembers.”

It’s also fairly obvious that highly stressed-out caregivers are less likely to be at their parenting best. For one thing, stress leads to poor sleep, just what parents getting up three times a night with the baby need. For another, when you’re in a near-permanent state of fight-or-flight-or-freeze — when you’re in a scarcity mindset and your brain is literally narrowing your focus to survival essentials — it’s tough to have the patience and attention needed to read picture books, do counting activities, or even just get on the floor and play. Stress also puts tremendous strain on marriages and other partnering relationships, threatening the stability of the entire family unit.

So why does money matter so much here? Because financial problems are the genesis of so, so much stress, both the toxic kind described above and more moderate versions. According to the American Psychological Association (APA), money is the undisputed champion of stress — it’s consistently found to be the number one stress generator among Americans. One study showed that simply putting people into a make-believe state of financial stress – asking them to imagine that their car broke down and they needed to come up with two grand for repairs – reduced their performance on cognitive tests equal to as if they had missed an entire night’s sleep. Recall that the Centers for Disease Control lists enhancing financial security as one of the top five strategies for preventing child abuse and neglect; this is why.

The group most likely to experience fiscal stress? Parents. In a 2014 survey by the APA, more than three-quarters of parents, a full 77 percent, reported money being a “somewhat” or “very” significant source of stress. Across all Americans, nearly a quarter reported experiencing “extreme” money stress in the past month. When it comes to giant child-rearing bills, these financial stressors are most assuredly not isolated to people living below the poverty line. There can be no question that this stress is negatively impacting both parents and their parenting. As the Pew Research Center puts it, “a broad, demographically based look at the landscape of American families reveals stark parenting divides linked less to philosophies or values and more to economic circumstances and changing family structure," like divorce.

The best thing we can do for parents, then, is let them be parents. Zeroing out child-care costs and giving stay-at-home-parents a caregiving stipend provides mental breathing room. It’s space to be able to curse the bad luck of the car’s battery dying but then playing peek-a-boo with your baby while you wait for the mechanic to call back. It’s being able to chat with your toddler about the different fruits and vegetables in the produce aisle instead of anxiously worrying whether getting the tomatoes and the spinach will overdraw your account. Put bluntly, free child care is likely, on average, to improve everyone’s parenting.

Beyond the direct impacts on parent-child interactions, reducing stress also improves the strength and satisfaction of partnering relationships such as marriages, which form the heart of the child development ecosystem. Put another way, a feeling of plenty promotes relational health in all directions. There’s a reason studies find that even modestly upping a family’s income has tremendous positive benefits across the board in terms of education, health, and happiness.

Remember, even when children are spending many hours in nonparental care, the bulk of their weeks are still spent at home. In fact, studies have borne out that parenting quality has an outsized impact on child development regardless of whether the child is in a regular external care environment. Researchers don’t yet know exactly why this is the case, but as Emily Oster writes in Cribsheet, one theory is that children are hypersensitive to the powerful consistency of the bond with their parents/guardians.

The need to destress parents is perhaps more important in today’s high-pressure parenting environment than ever before. In the current era — despite the increases in dual-worker households and non-traditional work hours, to say nothing of the rise of the "side hustle" or "gig economy" — parents still somehow manage to spend more time with their children than in previous generations. In fact, a New York Times article by Claire Cain Miller aptly titled "The Relentlessness of Modern Parenting" noted that research shows modern working mothers “spend just as much time tending their children as stay-at-home mothers did in the 1970s.”

In the end, a lot of this comes back to the fact that brain development is a hard worker. It doesn’t limit itself to a nine-to-five schedule, it doesn’t take weekends or holidays off, it doesn’t particularly care whether parents work during the day or not, and it’s definitely paying attention to the overall warmth or coldness of the child-parent relationship.

Free, universal child care represents for parents a long overdue deep, deep breath — and we’ll all be better off on the exhale.

This is an adapted excerpt from the forthcoming book, Crawling Behind: America’s Childcare Crisis and How to Fix It, out November 14 from Black Rose Writing and available for pre-order now.