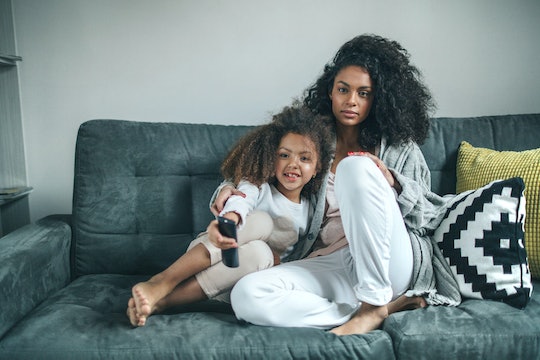 If You're An Empath, Here's How You Might Experience Your Child's Emotions

For some moms, the compassion they feel for their kids is next level — they may even experience their child’s emotions. Most people experience some level of empathy — it helps us to better care for the people in our lives — but certain people experience a higher level of empathy. Psychologists refer to them as "empaths," and over identification with others can actually cause them stress, discomfort, and pain. So how does parenthood affect empaths?

It’s challenging to report on the prevalence of empaths, since extreme empathy is typically self-reported. Additionally, being an empathetic person doesn’t necessarily mean you're an empath. Empaths often go as far as experiencing the physical sensations of another person. Recent research reported by Vice in an article "Super Empaths Are Real" has linked high levels of empathy to a phenomenon knowns as mirror-touch synaesthesia, or feeling the sensations other people experience. This is a condition present in an estimated one to two percent of the population and many people who have it aren’t aware of their own struggle to differentiate between their own experiences and the experiences of others.

“I am extremely sensitive to what others are feeling,” mother of two, Kari O'Driscoll, explains to Romper. She is 47, lives in Seattle, and her experiences suggest she is a true empath.

“I often fail to consciously determine which strong emotions belong to them and which belong to me.”

She describes experiencing extreme discomfort even when strangers are experiencing pain or extreme emotions, actually feeling mildly agitated. And, since she occasionally becomes physically ill after watching violence on TV, she avoids intense programing altogether.

“I actually feel those sensations in my body as though they are happening to me,” she says.

The lines between someone who experiences high empathy and who is an empath might be blurry, since it seems that feelings of empathy are experienced on a kind of a spectrum.

Whether a mom is a true empath, struggling to tell the different between her pain and the pain of others, or simply experiences a high level of empathy, this is a character trait that can make motherhood a bit complicated. There are many benefits to being empathetic, there are also downsides to taking on another person's emotions or physical sensations.

An empath’s greatest strength is the ability to understand and value their child’s emotions, according to Dr. Dana Dorfman, PhD, psychotherapist and co-host of the podcast 2 Moms on the Couch.

“This helps children feel understood and valued, [which is] helpful for healthy emotional development,” she explains to Romper. “Due to their sensitivity, empaths can identify the feelings which underlie a child's behavior and respond accordingly.”

She gives an example of how this could play out in a situation where a child is tantruming, a behavior that is typically distressing to parents, empath or not. Many parents may see this as a behavior to simply mitigate or maybe even punish. However, an empath will get just how frustrated the child is and likely begin problem-solving how to help them resolve the source of their frustration.

Teens benefited greatly from having parents who self-reported being highly empathetic to their teens’ needs.

On the flipside, she also describes empathy as an “occupational hazard” of being a mom. This is especially true when a mother is unable to differentiate her feelings from her children’s emotions.

“If the empath mom is reactive and unable to make this distinction, she may exacerbate and overwhelm the child,” she says. “She will not be equipped to contain and help her child manage the intensity of [their] feelings.”

In a 2016 study published in the journal American Psychological Association, the benefits and costs of empathy were examined in parent-teen relationships. Interestingly, teens benefited greatly from having parents who self-reported being highly empathetic to their teens’ needs. They had better emotional regulation. However, the parents’ experiences were more complicated. They reported feeling confident in themselves and their parenting, but also measured for higher systemic inflammation documented through blood draws. According to this research, the inflammation observed can be associated with an increased risk for cardiovascular disease.

For O'Driscoll, although parenting didn’t worsen the symptoms of her extreme empathy, it definitely shone a light on how she oftens over-identifies with other people and their emotions. For example, she experienced this phenomena with her mother and sister, eventually deciding to create physical distance between herself and her family as a means of protecting herself from the effect their emotions had on her.

“Having children started the phenomenon over again,” she says.

The good news about becoming more self-aware of her empathy was that motherhood actually caused her to find ways to address unhealthy patterns, rather than succumbing to the negative effects of extreme empathy.

This is important for all empaths — to realize that their reaction to others could be harming them and learning coping skills that will help them to create new patterns.

We’re conditioned to believe that our kids are a reflection of us, a commentary on who we are as people and if our kids are unhappy or acting out, that means that we are ‘bad’ mothers.

“That part took a ton of practice,” she admits. “Because especially as mothers, I think we’re conditioned to believe that our kids are a reflection of us, a commentary on who we are as people and if our kids are unhappy or acting out, that means that we are ‘bad’ mothers.”

She taught herself to practice mindfulness. She regularly reminds herself that her ability to separate herself from her kids’ experiences is actually more helpful to her as a mother, enabling her to meet their needs without bringing her own baggage to the equation.

Dorfman encourages high-empath mothers to practice many of these same strategies, saying that learning to become more self-aware and self accepting is an important part of self-care as an empath. She also stresses the importance of creating plenty of space for being alone, saying this is a practice that will help the high-empath mom to rest and recharge.

“If possible, this should be integrated into her daily schedule,” she adds. “She should honor this need and convey it clearly to her partner, so that [they] can facilitate it.”

This alone time could be a simple as an uninterrupted shower or few minutes of time spent alone before bed. Beyond simply being alone, Dorfmann recommends that empath moms schedule opportunities for emotional processing, like therapy, journaling, and yoga.

It isn’t just the mom who benefits from creating boundaries in her life, the whole family will experience the benefits of a mother who has recharged and can attend to their needs with the clarity emotional distance provides.