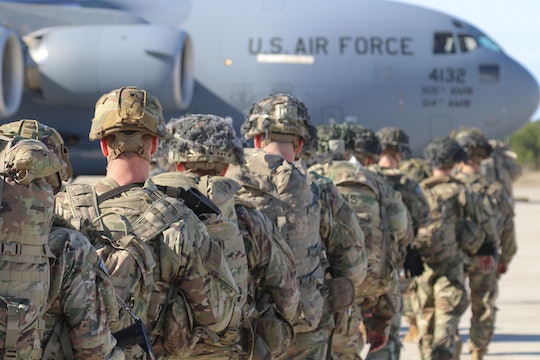 Parents, A Military Draft Is Unlikely Amid Iran Tensions — Here's Why

Along with escalating Washington's already fraught tensions with Tehran, the death of top Iranian Gen. Qasem Soleimani in an airstrike authorized by U.S. President Donald Trump last week has sparked fears among parents and young people about the possibility of another war and a renewal of the draft. Since then, reports Iran had retaliated with a missile attack on U.S. targets in Iraq have served only to further heighten concern among parents. But such concerns may be unnecessary as experts say the possibility of a military draft being reinstated is unlikely.

While U.S. law requires that all men between the ages of 18 and 25 register with the Selective Service System, the draft is not currently in effect. It was abolished in 1973 following opposition to the Vietnam War. Since then, the military has operated as an entirely volunteer force and reinstating the draft would require an act of Congress and the president's signature.

What's more, some experts have claimed that the draft is unlikely to be reinstated. "In this current geopolitical situation, there's almost zero chance unless somehow we end up in a large-scale ground war directly with Russia or China," Davis Winkie, project archivist for Atlanta History Center's Veterans History Project, recently told USA Today. According to Winkie, a war with Iran is unlikely to meet the threshold of requirements needed to justify reinstating the draft given the number of people currently serving in the U.S. military.

Other experts have claimed that reinstating the draft would be largely "impractical" and a poor political move. "I would also say that the likelihood of a draft is astronomically small," Eric Fleury, an assistant professor of Government and International Relations at Connecticut College, told USA Today. "It's militarily impractical and politically toxic."

Additionally, public support for reinstating the draft has reportedly been relatively low since the early 2000s. In July 2017, Kathleen Weldon of Cornell University's Roper Center noted in an article for HuffPost that the most recent poll on the matter — a CNN/ORC poll conducted in February of that year — showed just 20% supported reinstating the draft.

As news of Soleimani's death on Friday, and Iran's vows for revenge, sparked heightened concern for the draft among parents, the Selective Service System announced it was "conducting business as usual" in a statement released over Twitter. "In the event that a national emergency necessitates a draft, Congress and the President would need to pass official legislation to authorize a draft," the agency wrote in an effort to clarify the process required to reinstate the draft.

So, although the escalating conflict between Washington and Tehran is reason enough to be concerned, parents likely don't need to worry now, or anytime soon, about the draft being reinstated.