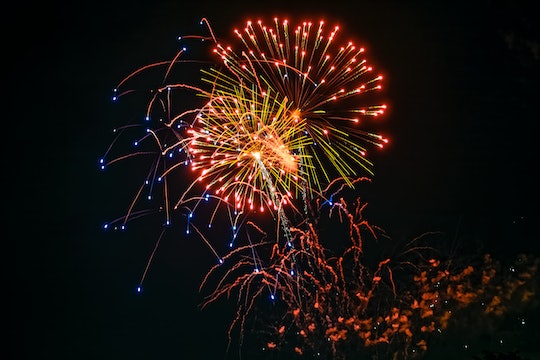 Across The Country, Parents Are Asking Why Fireworks Are So Bananas This Year

Getting a baby to sleep through the night can be difficult in even the best of circumstances. But it's a task made infinitely harder when fireworks are exploding at random intervals for hours on end, echoing off nearby buildings, rattling windows, and lighting up the sky. For people in various cities across the country, however, nightly fireworks have become a strange new daily reality, leading many parents to question why backyard fireworks are so bananas this year.

From California to New York, reports of amateur fireworks appear to be on the rise. Officials in New York City, where fireworks are illegal, have received 80 times the number of firework complaints this month when compared to June 2019, according to The New York Times. Additionally, The New York City Police Department told The Washington Post it's logged more than 12,500 calls about fireworks to 911 this month alone. And according to The Los Angeles Times, the city's 311 non-emergency number registered 6,385 calls about fireworks in the first 19 days of June. A sharp uptick from the 27 calls received during the same period last year.

Law enforcement in Boston, Massachusetts, have also seen a rise in fireworks complaints, according to Slate. Meanwhile in California, where amateur fireworks are widely considered illegal, residents in a number of Bay Area cities have also reported seeing more amateur fireworks being set off this year than in years past.

While some may not mind the nightly interruptions, many parents are finding them to be nothing short of a headache. In Chicago, musical artist Illi tweeted that "fireworks kept waking my child up," adding that it was "hard as hell to put her back to sleep." And, unsurprisingly, he's not the only parent struggling to keep kids calm and well rested amid repeated neighborhood fireworks displays.

"I am curious, how long are we gonna be tortured with sleep deprivation?" a parent in New York tweeted to local lawmakers. "We haven't slept properly for 3 weeks now! 3 Weeks!! Our baby wakes up crying 5 times a night due to non-stop #nycfireworks."

In Brooklyn, another parent shared how they'd begun using a white noise machine, foam earplugs, blackout curtains, a fan, and a lavender spray to help their toddler sleep through fireworks happening in New York.

But while a good night's rest is absolutely vital for parents and children, sleep isn't the only concern for some parents. On Sunday, Rob Gorski, a single dad to three kids on the Autism Spectrum, shared footage on Twitter of fireworks being set off just down the street from his house, noting that it's "been happening for at least the last week or so." "It's 24/7 on and off," he tweeted. "If it's not here it's down the street or somewhere else that close enough to rattle the windows. For the record, this is NOT sensory friendly, especially at 3am."

Gorski, who runs The Autism Dad blog and podcast, is right. For children with Autism or other sensory issues, the National Autistic Society has said the loud noises and unexpected nature of fireworks can be anxiety inducing and distressing. And for Gorski and his children, the nightly firework displays have become something of a nuisance.

In a follow-up tweet posted a few hours after his first, Gorski said his kids had been woken up at 12:30 a.m. by another round of fireworks going off in a different location than the first set. "When it finally stops, it starts somewhere else," he wrote. "WTF is going on?"

Unfortunately, it remains unclear exactly what is going on, although there are a number of different theories floating around. As Vox has pointed out, some have theorized that with most professional city-sanctioned firework displays cancelled in light of COVID-19, more fireworks than usual are finding there way into the hands of amateurs. In fact, a new survey from Orlando Health found that 2 in 5 Americans had planned to buy their own fireworks this year. Meanwhile, others have suggested that residents are simply more inclined to hear fireworks because COVID-19 restrictions have made cities quieter, as Vox noted.

Another theory is that the fireworks are a coordinated attempt by law enforcement to destabilize current Black Lives Mater protests against police brutality and activism efforts toward defunding police.

But while the reasons for this year's reported uptick in amateur fireworks may be unknown, their impact on parents and children looking for a restful night's sleep certainly is not.