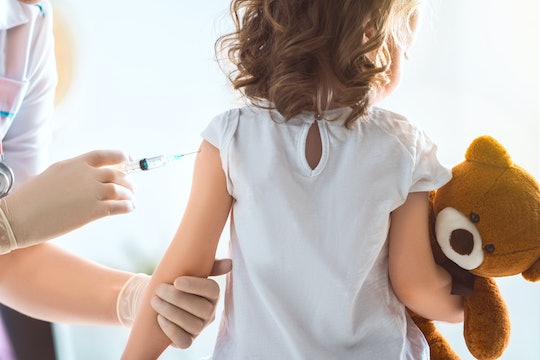 A recent tightening of vaccine exemptions has left a number of parents scrambling to sort out their children's education needs just as schools prepare to welcome children back into the classroom. In fact, some parents are avoiding New York's vaccination law by opting to home school or, in extreme cases, move out of state, as Syracuse.com recently reported.

Earlier this year, New York ended religious exemptions to vaccine requirements amid the worst measles outbreak the country had seen in nearly 30 years, according to the Associated Press. As a result, parents are no longer able to cite religious beliefs as their reason for opting out of school immunization rules. In a statement to Romper, however, the anti-vaccination organization Children's Health Defense, which was founded by Robert F. Kennedy Jr., says they are continuing to appeal the decision and "are prepared to take the lawsuit as far as we can." Most recently, a judge denied the families' request for a preliminary injunction.

Under the new policy, all children attending public, private, and religious schools, pre-K, and daycare in the state must obtain all required vaccinations unless they have a valid medical exemption, according to the New York State Department of Health. To attend or remain in school, unvaccinated children must receive their first age-appropriate immunization within the first 14 days of the school year and show documented proof of a scheduled follow-up immunization appointment within the first 30 days.

"Immunizations give children the best protection from serious childhood diseases and are safe and effective," a spokesperson for the New York State Department of Health tells Romper. "Parents should talk to their pediatrician and work with their school's health services to make sure that all of their children’s immunizations are up to date."

But not all parents are willing to abide by the state's new policy for vaccine exemptions. "We are prepared to sell everything we have and move out of state so that our healthy children can attend school without vaccines," Gretchen H. Thompson, a dental hygienist and mom of five, recently told Syracuse.com. Although Thompson, her husband, and her two oldest children have been fully vaccinated, her 6-year-old twins and 4-year old have not received any vaccinations, according to the news outlet.

Thompson and her husband plan to homeschool their unvaccinated children while they make arrangements to sell their home and relocate to a state that allows religious exemptions to public school immunization, according to Syracuse.com. "We are changing everything, she said. "I never thought in a million years I would home school." Thompson did not respond to requests for comment.

Of course, Thompson isn't the only parent having to decide between fulfilling vaccination requirements and finding alternative means of education. A lawyer representing dozens of families that are challenging New York's new vaccination policy has claimed it would leave 26,000 families unable to send their children to school, according to U.S. News & World Report.

While there are currently no statistics available regarding the exact number of parents turning to homeschooling as a result of New York's policy change, the Christian homeschool network Homeschool New York/Loving Education At Home (LEAH) tells Romper it's seeing a higher demand for support for new homeschoolers as a result of New York's repeal of religious exemptions for school vaccinations. What's more, hundreds of families with unvaccinated children were reported to have attended a Homeschooling 101 workshop hosted on Long Island by an anti-vaccination group known as The New York Alliance of Vaccine Rights last month, according to The Wall Street Journal.

And while many parents opposed to vaccines have argued that New York's new policy violates their rights, state legislators who supported the repeal said it follows repeated abuse of the exemptions. "This has been driven in part by people abusing the vast loophole in our laws created by the religious exemption," New York Sen. Liz Krueger said following the repeal's passage in June. "The fact that many of those using the current religious exemption are doing so in bad faith is made clear by the arguments employed in opposition to today's bill, which have relied almost entirely on long-debunked junk science to attempt to prove the dangers of vaccines rather than on any religious scripture."

Since then, Assistant State Attorney General Helena Lynch has argued that repealing religious exemptions to vaccination mandates is a measure designed to protect the public's health in light of New York's recent measles outbreak. "We have to come back to the principle that the right to religious expression doesn't include the right to put others in danger," Lynch told U.S. News & World Report.

According to the U.S. Centers for Disease Control and Prevention (CDC), there have been more than 1,200 individual confirmed cases of measles in the United States this year alone. More than 75 percent of those cases, according to the CDC, were linked to outbreaks in New York. Although controversial, legislators in New York and the other states that have also barred religious exemptions to school immunization mandates, say they're acting to address what they feel is a growing public health crisis.