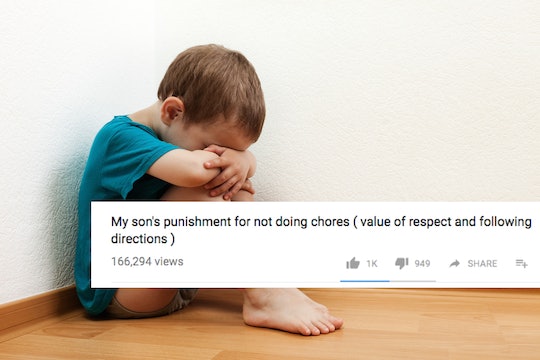 Parents Are Disciplining Their Kids While Livestreaming To Shame Them, & It's Pretty Shocking

In the age of the internet, it's becoming increasingly popular for parents to share every aspect of their child's lives online. But what happens when that transparency reveals problematic abuse? What happens when the issue becomes not a singular instance or isolated event, but a trend that people all over the world are tuning in to watch? That's what's happening right now. Livestreaming children being disciplined is the newest child-shaming trend, and it's downright disturbing.

The New York Post reported that, with over 30,000 clips and counting uploaded online, people are tuning in to watch parents taking extreme disciplinary action, like giving kids embarrassing haircuts as discipline, disposing of their holiday gifts in front of them, or in one case, forcing a child to drink hot sauce and then take an ice-cold shower while being yelled at. Jessica Beagley, who was responsible for the latter case, was convicted of child abuse, and forced to pay a $2,500 fine, according to The New York Post.

It seems that the issue is an underlying misperception about what constitutes productive discipline versus retributive punishment or abuse, and unfortunately, it's widespread enough to make these videos so popular that they've warranted national press coverage. Though the videos may seem shocking on the surface, what's more important to note is a mindset that is far too pervasive when it comes to disciplining children: that shaming is helpful, if not part of effective parenting.

Bryan Thornhill, another parent who posted a video of his son being forced to walk to school in the rain as discipline, spoke to Metro about why he feels it was right to film the punishment and post it. When asked what he gained from sharing the video online, he said: "It's actually the other parents' gain. With the tens of thousands of messages I’ve received from other parents who were running out of hope trying to find ways to discipline their children in a safe way but in a proper way. That’s what I’ve gained."

In the video, he drives behind his son as his backpack visibly shakes from the cold. “Don’t be a friend, be a parent,” he says while filming. Thornhill did not immediately respond to Romper's request for comment.

This does not seem to be an isolated opinion. The New York Post report also noted that the term "tough love" is frequently used in the video descriptions, with one reading: "Maybe a few kids can take something away from this… If you’re so disrespectful to your parents and yourself as to post this kind of thing on Facebook, you’re deserving of some tough love."

There are other videos on YouTube with titles like "How to punish your spoiled kids" and "My son's punishment for not doing chores ( value of respect and following directions )," if you search for "punishing kids" on the platform.

People responding online seem to be sharing similar sentiments, which is that they don't take issue with the discipline itself (granted that it is safe and not abusive) rather, the issue is really posting and sharing of it online, which constitutes the shaming.

There's a lot of research to support the idea that this type of public humiliation is destructive to a child's psychological development. The American Psychological Association explains that psychological abuse is just as harmful as physical or sexual abuse. Psychologists Sara Au and Peter L. Stavinoha explain on Psychology Today that most parents' logic behind shaming their children is misinformed:

No doubt what most parents who inflict shame on their child are trying to do is raise their child’s consciousness of the potential consequences of their actions. In behavioral terms, shaming would be considered an aversive technique. Basically, the principle is that the shame is a negative consequence of an unwanted behavior, so then the person avoids doing that behavior in the future because of the aversive outcome. But the painful feelings that shame unleashes in a young person’s mind are the real problem.

Mostly, it's just about reminding parents that psychological abuse does not help children "behave" — it impacts their psyche in destructive ways, potentially leading to mental and emotional health problems down the line. It is not empowering, and the fact that it is a trend is troubling, and right now, it's yet another sign that productive, healthy parenting needs to be a more pervasive topic of conversation.