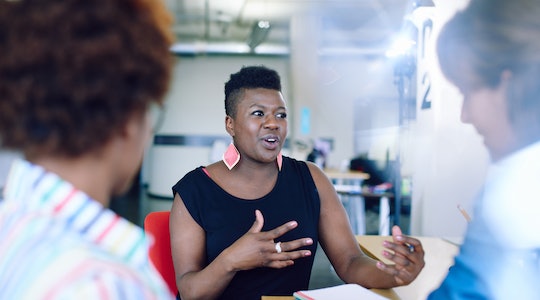 Study: Parents Are More Dedicated To Their Jobs Than Their Childless Co-Workers

If you look at the "motherhood wage gap" that exists between the earnings of moms and their child-free, working counterparts, one might expect that having a child hinders work — as well as parents' commitment to it. After all, parents have to juggle school drop-offs and pick-ups, childhood flus and doctor visits, and schedules where kids always come first, right? In fact, that perception is actually wrong — at least according to one recent study, which found that parents are more dedicated to their jobs than their co-workers without kids are.

As Fortune reported, Great Place to Work recently surveyed over 440,000 employees at hundreds of different companies, and they found that parents were more likely than childless employees to say that work was "more than just a job." They were also more likely to plan for a long future at the company than those without families — an outlook that generally means less turnover and more employee retention for employers.

Parents were also less likely than one might expect to rank "work-life balance" as an important driver of retention, but in fact, the workplace traits keeping employees at companies were pretty much the same for employees both with and without kids. Employees were more likely to stick around if they were part of a fun workplace, felt like they were making a difference, and had pride in their organization, while "work-life balance" came near the bottom of the list for both parents and child-free workers.

Great Place to Work's findings are especially interesting considering that past research has shown that employers tend to rate moms as 12.1 percentage points less committed to their work than working women without kids. Research from the Harvard Kennedy School shows that moms are also judged as 10 percent less competent than non-moms (despite equal competencies) and are 8.2 percent less likely to be recommended for a promotion than child-free women.

Judging by Great Place to Work's findings, those problems still widely exist — and are largely felt — by moms in organizations across the United States today. The survey found that interviewed moms were less likely than child-free women to say that their organizations handled promotions fairly, and often felt that they weren't shown appreciation for hard work. Moms were also less likely to believe they were paid fairly for their work — which should come as no surprise considering that research shows mothers routinely get paid less than women without kids do. (Moms are generally offered a starting salary that's 7.9 percent lower than the offers recommended for child-free women, according to researchers at Harvard.)

Fortunately, there are plenty of ways for employers to become more parent-friendly workplaces. According to Great Place to Work, the best employers need to acknowledge parents' commitment — and then "make the most of parents’ dedication" by employing several best practices that help parents further develop at the workplace. Giving moms and dads flexible work schedules (and the ability to work from home when necessary) is one way to give parents more choice.

Another practice that can help companies hire and retain more parents includes giving them generous time off when needed. Companies that made it onto Great Place to Work's "Best Workplaces for Parents" list this year gave new moms an average of 60 days of paid maternity leave and dads an average of 35 days.

Finally, it also benefits parents if companies have clear communication channels, rather than relying on informal, after-hours employee socialization to pass messages around, since moms and dads often have their out-of-work hours occupied with parenting.

Here's to companies that recognize parents' commitment to the job — and then work to harness that dedication despite societal misconceptions. Because clearly, if a company can recognize that commitment and encourage it, they're going to get years of great work from their working parents.

More Like This
Reddit Applauds Mom Of Five Who Stood Her Ground & Left Sleeping Dad Behind
21 Back-To-School Instagram Captions For All The Feels
Dr. Jill Biden Just Delivered Some Frank, But Powerful, Advice On Motherhood
10 Parenting Lessons We’ve Learned From 'Only Murders in the Building'