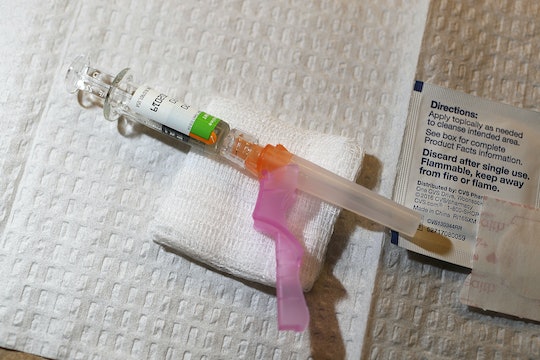 Nobody likes getting shots but, as most adults know, they are infinitely more scary when you’re a child. And a new study shows that some parents are postponing vaccinations because their child is afraid of the doctor’s office. That can be a decision that spells risk not only for the child, but for all those who come in contact with them.

The research, by C.S. Mott Children’s Hospital at the University of Michigan, is part of a national poll on children’s health, according to Science Daily. The survey included 726 parents with at least one child between the ages of two and five. Results found that one in 25 parents, about four percent, have delayed a child’s vaccination and three percent canceled a visit entirely because of a child’s reaction to visiting the doctor. While that number may seem small, it’s masking the great risks that are faced by unvaccinated children.

Vaccine-preventable diseases can break out at anytime and in any place, according to the Centers for Disease Control and Prevention, and there is no way to know if an unvaccinated child could come down with a mild or severe case. In the United States, doctors still see cases of whooping cough, chickenpox, and the flu that can be life-threatening to young children, the organization warned.

There are a few reasons to postpone a child’s vaccination, according to Health, but they are very specific: situations like a high fever that would mask any reaction to the vaccine, a child undergoing chemotherapy, or if someone at home has a compromised immune system, in which case vaccines that use a live virus — like the flu mist — should be avoided. Some parents put off or forego flu and MMR vaccines because of a child’s egg allergy, but even that isn’t a good reason because the shots contain such a small amount of egg, VeryWell Health reported. Instead, as pediatrician Dr. Andrew Hertz, MD, told Health, the vaccines can be administered by a pediatric allergist if parents are concerned about a child’s egg allergy.

Unfortunately, shots are the number one reason cited in the Mott Children’s Hospital study for parents to delay or cancel doctor’s appointments. Sixty-six percent cited it as the top reason for children 2 to 3 years old, and 89 percent cited it as the biggest reason for children 4 to 5 years old. Sarah Clark, co-director of the survey, said parents could be making the problem worse. “Children’s fear of shots can be exacerbated when they pick up on their parent’s anxiety and it can be difficult to calm children down during these services,” she told Science Daily. But don’t tell children there won’t be any shots or that they won’t hurt, she advised, since it can end up causing even more anxiety about going to the doctor in the future.

Parents provided some suggestions for ways to help children deal with the inevitable need to get shots. Don’t tell children too much in advance, since they’ll only worry for longer. Distract the child during the injection by squeezing their hand, talking to them, or making faces. And if a child is truly hysterical, step away and let the doctors and nurses do their jobs. Standing the corner and maintaining eye contact with the child to provide support while staying out of the way can be a good way to go, Parents noted. Remember that pediatricians deal with children all day long, so your child’s tantrum isn’t their first rodeo.

It can be tough to be brave for your child, but doing so provides important protection for their health and well-being. It also clears vital room on the to-do list so you can move on to the really important things, like a post-visit ice cream.