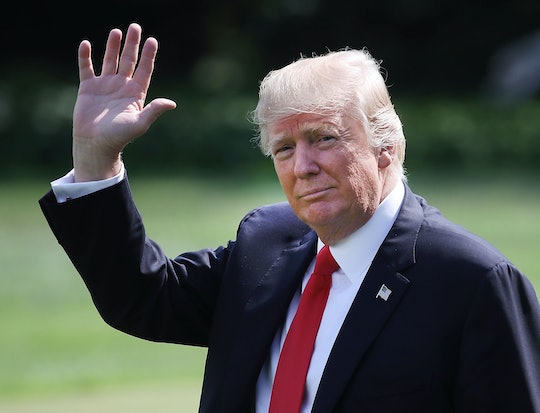 Despite a decades-long tradition to leave politics back in the White House, President Donald Trump’s Boy Scout speech to nearly 40,000 young men on Monday evening was nothing but political — and parents are rightfully pissed. Although the president vowed at the beginning of his remarks that he wouldn’t talk about the current climate in Washington, he quickly strayed far away from that promise.

Trump started his speech at this year’s jamboree in West Virginia, by saying: “Who the hell wants to speak about politics when I’m in front of the Boy Scouts?” And that’s how his remarks should’ve stayed. As The Washington Post reported, American presidents for the past 80 years have managed to stay away from politics and instead talked about “the ideas of service, citizenship and global diplomacy.”

But in true Trump fashion, things quickly veered away from longstanding convention and tradition. As he spoke to a sea of children, Trump rambled on for roughly 35 minutes about the fake news media and campaign polls, joked about the size of the crowd, and then proceeded to throw insults at his former presidential rival Hillary Clinton and President Barack Obama — drawing boos and chants from the thousands of youngsters.

Parents quickly addressed their anger with the president's highly politicized speech. One wrote on the Boy Scouts of America Facebook page: "I'm a Scout parent and volunteer and I was sickened by what I saw yesterday. Regardless of who the speaker was, the speech was tasteless and the antithesis of what Scouting represents."

"I will take my time, money and my kid else where, why would I expose my kid to your right wing hypocritical organization," another parent wrote on Facebook.

Another commented: "It was painful to see Donald Trump address a captive audience of impressionable young people in such a callous and partisan way. You should issue a statement of regret."

One mom wrote that she's "done with scouts" after the organization "felt the need to have my kid listen to a liar stroke his ego on our time."

According to Politico, the Boy Scouts of America issued the following statement on Monday evening in response to the heated criticism:

The Boy Scouts of America is wholly non-partisan and does not promote any one position, product, service, political candidate or philosophy. The invitation to visit the National Jamboree is a long-standing tradition and is in no way an endorsement of any political party or specific policies.

As a large number of parents and former Boy Scouts have pointed out, Trump's speech was inappropriate and tarnished the 107-year-old organization's values. What's more, it serves as yet another example of how Trump's approach to politics is not only far from traditional, but could also do a lot of damage to the country's most impressionable.