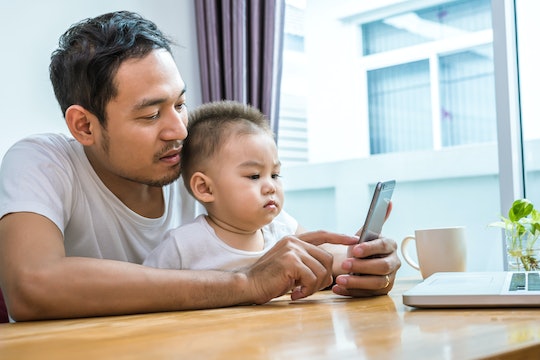 Research Says Parents Rely On Google To Teach Kids Certain Skills, But It's Not A Bad Thing

It's not just kids whose lives have been affected by being born into the digital age. Those who were coming into adulthood or other formative years as the internet developed have been affected by technology, too, and it's beginning to show. New research has found, according to The Independent, that parents are using Google to teach their kids these traditional skills, but it's not actually a bad thing if you think about it.

A study of 2,000 parents was conducted by Haven holidays, a vacation company based in the United Kingdom, to help inform its Nature Rockz program. According to SWNS digital, the program aims to help both kids and adults learn some traditional outdoor skills in a safe environment with trained experts.

What exactly makes up traditional outdoor skills? Haven lists some examples on the Nature Rockz program page, such as building a shelter, making fire, purifying water, tracking skills, and general information on how to navigate various outdoor landscapes. For some, those may seem like basic and easy skills to pass on, but Haven's survey found that many parents are struggling to explain them to their kids.

Six out of 10 parents asked in the survey wished they were better equipped to educate their children, according to The Independent. And although The Independent reported that two-fifths of parents believed their child's grandparents would be able to teach skills their children want to learn, they are still more likely to turn to Google to get the answer.

More than half of parents asked couldn't show their kids how to toast a marshmallow, according to SWNS digitalhub. And the outlet reported that only 17 percent of parents asked are confident they could build a campfire.

The survey quickly reveled that, out of all parents, millennials aged 25 to 34 are struggling the most when it comes to teaching these type of traditional skills. But, don't fret. Things are starting to look up!

Although millennials grew up during the period of some serious technological advancements, that doesn't mean they're totally turned off by the outdoors or that they have no interest in gaining some new skills. In 2017, the North American Camping Report found that millennial were actually the driving the growth of camping.

"In the overall population millennials comprise 31 percent of the adult population, yet account for 38 percent of campers," the report noted. According to The Cabin, in 2017 an estimated 13 million U.S. households planned to camp more than they did in 2016 and that growth is not new. The Cabin reported that more than 1 million new households have started camping each year since 2014.

It's important to remember, millennials didn't just pop out of the ground as fully formed adults. Like kids today, they needed someone to show them how to camp and navigate the outdoors, but those skills were on the decline before their arrival.

Some of these skills are pretty synonymous with country living. That means at one time, more people might have picked up these skills as basic life necessities. But how does someone pick up those skills if they aren't living in rural areas anymore? Although the early United States was largely rural, the shift of urbanization occurred across multiple generations. By the 1990s, three out of every four Americans lived in an urban setting, according to The USA Online.

This means it's totally possible millennials didn't learn these skills because they weren't as exciting as whatever new tech was out at the time. But, it's also important to remember where millennials were growing up. For their parents or grandparents, a camping trip might have meant going out into the backyard, while for millennials it could require at least a two hour car ride.

Now, though, millennials are clearly putting in the work to make up for lost time and pass that information onto their children, which is important.

Making a campfire is among the outdoor skills most coveted by children. Putting up a tent, building a raft and fishing were also popular, as the survey found. As Livvy Gormally, a parenting expert, said, according to The Independent, "Doing activities as a family and learning together can encourage kids to try something new helping them to build confidence and boost resilience."

So, if you don't know many traditional outdoor skills, don't worry. Going out, trying something new, and learning with your kids is a bonding experience that they'll be sure to remember... even if you have to Google how to do it first.