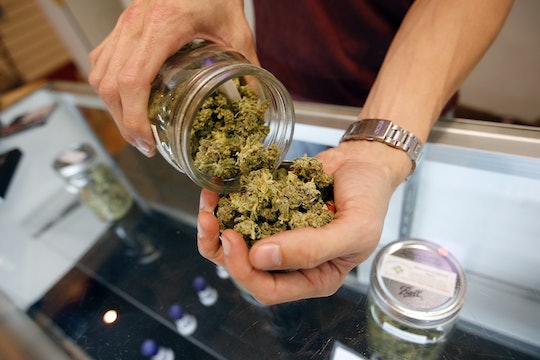 Some Parents Are Using Medical Marijuana To Treat Their Kids' Autism

Having a child with a disability or medical condition who doesn't respond well to treatment can be frustrating and heartbreaking. Parents want their kids to be happy, healthy, and safe, but sometimes, it's not that easy to find the answers. That's why some parents are using medical marijuana to treat their kids' autism, but does it work? Is it safe? And is it even legal? Unfortunately, right now, only one of those questions has a clear answer. Research is ongoing, though, so we might have more evidence on the efficacy and safety of such treatments soon.

Some researchers believe that autism might be caused by a gene mutation that blocks the natural production of endocannabinoids, which are neurotransmitters that regulate a variety of physiological and cognitive processes, according to Mom.Me. The theory is that medical marijuana or hemp oil, which contain cannabinol (also known as CBD) and tetra hydro cannabinol (THC) might help patient's brains to pick up the slack. But marijuana is still largely thought of as a recreational drug, first and foremost, and the stigma attached to that might understandably make some people uncomfortable with the idea of administering it to children. So is this legit, or just another snake-oil fad that preys on desperate parents who have already tried every medicine, therapy, and diet without successful results?

The internet is full of anecdotal evidence that it works for some kids, but anecdotes are stories, not science. "I made my autistic son cannabis cookies. They saved him," reads the headline of one such account in the Washington Post. Marie Myung-Ok Lee describes being "desperate and frantic" to help her 9-year-old son, who was "consumed by violent rages" as often as 300 times per day since he was 18 months old. She was, as one would expect, apprehensive about medical marijuana, but heartened by the fact that it's one of the few non-lethal substances on earth.

After experimenting with different strains, Lee wrote, her son's outbursts "became less ferocious and less frequent." Some had side affects most readers will be familiar with (red eyes, lethargy), but eventually, she found one that worked, and her son now receives his cannabis via an oil tincture several times a day. Therapy and traditional medicine didn't help, but Lee believes that marijuana did. Still, she's nervous about getting in trouble with the law or social services, because not everyone agrees that pot is a valid medicine.

Dr. Daniel Coury, chief of developmental-behavioral pediatrics at Nationwide Children's Hospital, in Columbus, Ohio and medical director of the Autism Speaks Autism Treatment Network explains the difference between recreational and medical marijuana use: "Hemp and marijuana both belong to the Cannabis plant genus. Hemp differs in that it has very little tetra hydro cannabinol, or THC, and higher amounts of cannabidiol, or CBD. High amounts of THC are associated with marijuana's well-known euphoria. CBD is not. Proponents of hemp oil treatment say that users don't feel stoned." So if you like the idea of the medical benefits of marijuana, but not the idea of getting high (or getting a child high), there is a happy medium, it seems.

A spokesperson for the Autistic Self Advocacy Network provided the following statement to Romper:

ASAN has no official position on medical marijuana. However, there is a very real problem with people giving untested and unsafe products to autistic children in order to "treat" their autism, or using established medical procedures or medications in unsafe ways, sometimes causing injuries or death. As with any medication, doctors should not prescribe medical marijuana unless there is a robust body of research indicating that it is both safe and helpful for the intended use, and parents should not administer it without the supervision of a doctor.

Medical marijuana isn't legal in every state, and even those that do allow its use have limits on which conditions it's approved to treat (check the National Conference of State Legislatures for your state's laws on medical marijuana). Although research does support marijuana's efficacy for treating nausea, anorexia, and glaucoma, its effects on autism are still largely unproven, as well as its effects on a child's developing brain.

But that might soon change; Children's Hospital of Philadelphia is set to launch an observational study on treating autism with marijuana early next year, according to the Inquirer. The hospital won't be providing the drug to children; merely studying those who are already taking it. If you're a parent and you'd like to learn more, you can contact the hospital at 215-590-4924.