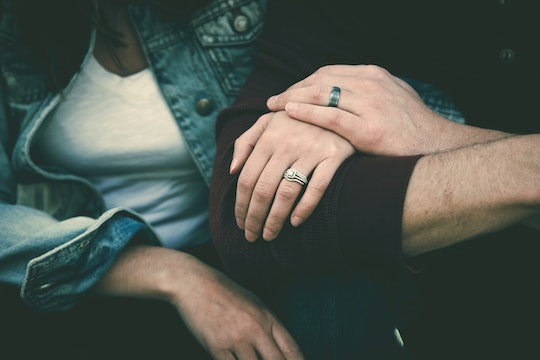 Parents Are Having Less Sex, But Don't Blame Technology

It seems like ever since the iPhone was invented, people have been blaming technology for a wide array of things. From an inability to truly connect with other people, increased rates of obesity, and more, technology has long been a scapegoat, in addition to being something on which we regularly rely. And with the news that parents aren't having sex as often as before, you might assume that technology is also at fault. But, according to a new study, that lack of intimacy doesn't stem from what everyone assumes is the culprit.

The study, entitled, "Declines in Sexual Frequency among American Adults, 1989–2014," (sounds super fun, doesn't it?) looked at a total of 26,620 adults, 9,776 of whom were parents. And according to the results, parents are having a lot less sex than single people; In fact, married people in general aren't having much sex — at least not as much as one would assume.

The research seems to point to something other than technology as the biggest reason couples aren't getting intimate:

Americans are having sex less frequently due to two primary factors: An increasing number of individuals without a steady or marital partner and a decline in sexual frequency among those with partners.

Among other findings, the study also concluded that, "married people’s stats sunk to 55 sessions a year, compared to single people’s 59." And while, sure, technology may be to blame for a small portion of the change, it certainly isn't the driving force.

According to The Washington Post, "as more people put off parenthood until later, the combination of middle age and child-rearing may create a 'perfect storm' of sexual infrequency." However, as is often the case, parenthood doesn't necessarily mean increased age, and the study also suggested that millennials are having less sex than older generations.

According to the study, age and generation are a large part of these new findings, and, perhaps surprisingly, it is the older generations who are having the most sex:

While all this new information is interesting, and certainly technology isn't the only reason for the decrease in sex, there is definitely still a chance that it plays a role, however small that role may be.

With the readily-available distraction of a smart phone, it seems that people aren't looking as sex as a way to just pass the time anymore. And though phones aren't the only cause, it couldn't hurt to spend a little less time on them around your partner. You never know what could happen.