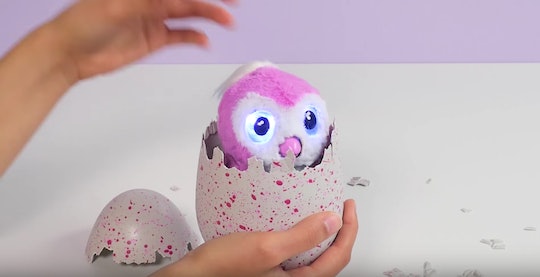 Parents Camped Out For Hatchimals, But Not Everyone Went Home With A Gift

Hatchimals are the newest toy trend to hit store shelves everywhere, and, simultaneously, your child's Christmas wishlist. Unfortunately, stores can barely keep Hatchimals on their shelves for long because this newest toy craze is selling out fast. Like the Furbies and Nintendo video game consoles of our past, Hatchimals are this Christmas' "it" toy. So I don't blame the parents who camped out for Hatchimals across the country, for hours in the cold — it's likely they were just hoping to snag a Hatchimal for their little ones, last minute. Unfortunately, because of the toy's popularity, not everyone could get their hands on one. (Seriously folks, if you see a Hatchimal at the store, buy it for your child immediately — because the demand is that high.)

Earlier in the week, retailer Toys R Us announced that it would be releasing a limited number of Hatchimals in its stores on Sunday Dec. 4. Not wanting to risk disappointing their children this Christmas, parents took matters into their own hands by camping outside of Toys R Us, so they could be first in line and be guaranteed a Hatchimal. Unfortunately, that's not what ended up happening. According to KTNV Action News, the supply didn't last long — hundreds of people lined up outside of one store in Buffalo, New York on Sunday morning, for example, only to find out that the store had 70 Hatchimals in stock. Toys R Us limited each customer to one Hatchimal.

In Florence, Kentucky, too, some people waited in line starting at 1 a.m. to get their hands on a Hatchimal before Toys R Us opened later in the morning. Judging from Twitter, it seems as if every Toys R Us store had limited amounts of Hatchimals in stock, therefore leaving many empty handed. It's unfortunate that parents who are willing to do everything to make their children happy had to go home without a Hatchimal — but this is something that parents have had to do for generations. Who could forget the times that parents waited in line to purchase Tickle Me Elmo in the 1990's?

While the demand for Hatchimals is so high, there is a beacon of hope this holiday season. According to the Hatchimal website, a "brand new batch" of Hatchimals will come out in early 2017 — and some stores are developing pre-sale or raincheck programs so every parent that wants to can purchase a Hatchimal now. Even if Santa might not be able to put a Hatchimal under the Christmas tree, parents might be able to deliver for their kid's birthday, or at least stick an "IOU" from the bearded man in the red suit in the stockings instead. Let's just hope that Hatchimals are still the biggest toy craze once everyone is able to get their hands on them.