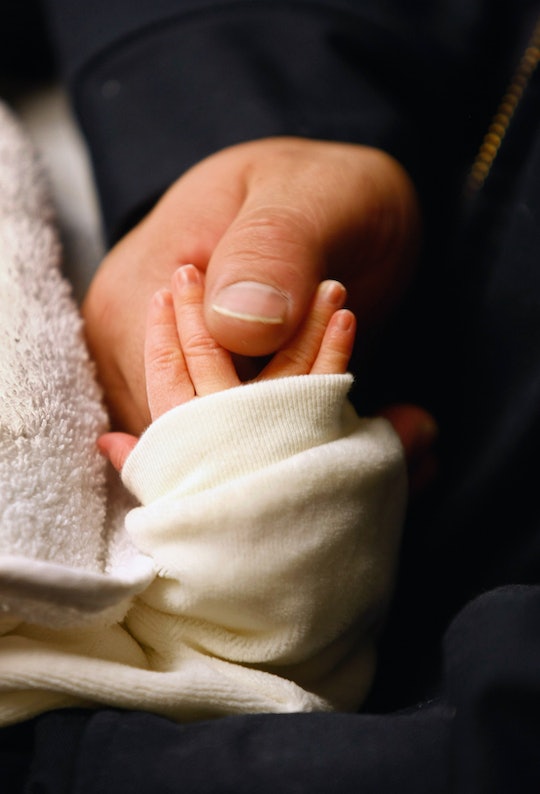 Study: You Can Know If Your Baby Will Be Left-Handed Or Right-Handed — In The Womb

For some reason, as a kid, I was fascinated by left-handedness. For a few weeks in second grade, I tried to teach my right-handed self to become left-handed, but disappointingly, all I could produce was chicken scrawl. I eventually gave up — I had a pretty short attention span — and decided it simply wasn't in the genetic cards for me. And as it turns out, I may have been right: according to a new study, parents can learn if their babies are left-handed or right-handed while their kids are still in the womb, hinting that hand dominance is set pretty early on.

The study, carried out by a team of Italian researchers and recently published in Scientific Reports, found that scientists could accurately predict a baby's handedness as early as 18 weeks into gestation, simply by looking at several hand movements babies made while in the womb.

To make their predictions, researchers studied 29 fetuses making three different hand movements at 14 weeks, 18 weeks, and 22 weeks' gestation via 4D ultrasound. They then came back to those same children nine years later (now that is dedication indeed) to discover their manual dominance.

As it turns out, by simply studying babies' movements in the womb, the scientists could predict with 89 to 100 percent accuracy the babies' later hand dominance. At just 18 weeks, it seems, the babies were already making certain hand movements that require precision (such as reaching for their eyes and mouth) more quickly with their dominant hand. (A control movement that didn't require the same precision — like reaching for the uterine wall — didn't show as much of a difference in speed.)

Now, the findings are helpful for more than just excited parents who want to know every last detail about their unborn child. According to the researchers, left-handedness can be linked to a higher risk of developing depression, schizophrenia, autistic spectrum disorders, and mood disorders, so learning early on that a child is left-handed could help parents keep an eye out for any potential problems early on. As Yale researcher Jadon Webb, who studied the link between schizophrenia and handedness, told YaleNews in 2013:

Finding biomarkers such as this can hopefully enable us to identify and differentiate mental disorders earlier, and perhaps one day tailor treatment in more effective ways.

The study out of Italy is only the latest one to point to a strong genetic component to handedness. Research in 2013 pointed to a group of genes that likely play a part in deciding a child's handedness, and research carried out by a group of British scientists in 2004 found that even at 10 weeks old, most babies prefer to suck on the thumb of the hand they will eventually come to favor, according to TIME. (Even better? That was something that scientists could see in just a regular ultrasound scan.)

No word yet on whether your ultrasound technician will be able to predict whether you're having a left-handed or right-handed little baby, but the potential to use the information for diagnosis later on seems promising. And for expecting parents, it's also interesting to see just how early babies start developing dominance in one hand and differentiating hand movements.

Oh, and if you're determined to become ambidextrous like I was as a child, maybe just give in to the left- or right-handed glory your 18-week-old self wanted you to be. As it turns out, there's no real benefits to becoming ambidextrous, and trying to train ourselves into it might even cause trouble for our decidedly dextrous brains. It's probably best to just let nature do its thing.