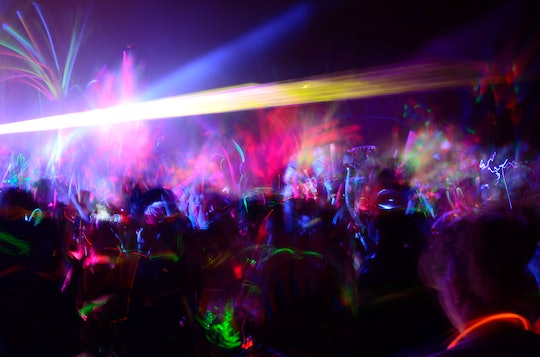 Parents Can Now Party With Their Kids At Family Raves, So Break Out The Glow Sticks

A lot of people think that becoming a parent means the end of any sort of social life. And while it's true, to some extent, that having a baby means a lack of sleep amongst other things, it doesn't mean the end of fun. Especially considering that parents can now party with their kids at these family-friendly raves, parenthood just got a whole lot cooler.

That's right, as reported by POPSUGAR on Sunday, a company called Big Fish Little Fish is taking parenting to a whole new level by hosting rave events fit for kids. Currently, the company is only rocking out in the United Kingdom (as well as in Melbourne and Sydney, Australia), but they've been steadily growing in popularity over the past few years and now "holds ‘raves’ nearly every weekend in towns all over the country and at festivals including Glastonbury and Camp Bestival," according to the Daily Mail.

How great does that sound? Being a parent can get stressful, exhausting, and just plain overwhelming. And having the opportunity to dance it out might just have a positive impact on parents, as well as their children's.

Oh, and the raves themselves are apparently pretty fun. According to the company's website, the "parties are held in interesting and quirky venues; clubs, arts spaces, festivals, woods and pubs, which help create the ambience of being at a real rave." And yes, glow sticks are included in the price of admission.

Look At These Videos

Big Fish Little Fish raves last only two to four hours, and are equipped with a variety of features, according to the website. Parents can expect "bubble Machines, club visuals, giant balloons, glitter cannons and parachute dance," and "Captain Cookie craft area with themed crafts, giant colouring mural, play-doh table," for the kiddos, and a bar for the grown-ups.

Founder and brainchild behind Big Fish Little Fish, 48-year-old Hannah Saunders, started the company to show that parents should still be able to have fun with their kids. In an April interview with The Curious Mummy, Saunders explained:

We loved going to festivals together — Glastonbury, Latitude — but other "family friendly" activities I found to be entirely child-centric and I thought I should just design the thing I wanted to take my own family to so we could have a good time together.

And isn't that (one of) the best part(s) about starting your own family? Having a group of people to do fun things with?

And that's exactly what Big Fish Little Fish is striving to accomplish. Because having kids doesn't mean that the party is over, it just means that there's a different party to go to, and that you should probably bring a diaper bag. According to the company's website:

BFLF is something we want to take our own families to — somewhere relaxed, entertaining, and where the adults enjoy themselves as much as the children and vice versa with grandparents, uncles, aunts and carers all in the mix.

Basically, family-friendly raves sound awesome, and need to be a thing everywhere, not just in the United Kingdom.

Adding a new way to have some fun — for kids and parents — can be especially beneficial, as research has shown that becoming a parent can sometimes change a person's happiness, and not always for the better. As Quartz reported, "having kids makes you significantly less happy compared to people who don’t have kids. It’s called the parenting happiness gap."

This "happiness gap" has even been scientifically proven, and it was discovered that the United States was actually the worst when it comes to the happiness gap. According to a study from the Council of Contemporary Families, "the U.S. has the largest happiness shortfall among parents compared to nonparents, significantly larger than the gap found in Great Britain and Australia."

Yeah, you read that right. The happiness gap was a lot smaller in Great Britain. Now, while I can't definitively say that that's because of family-friendly raves, it certainly couldn't hurt.

So, break out the neon headbands and knee-high socks, folks. The world of parenting is on the cusp of a dance-party revolution, and it's going to get wild.