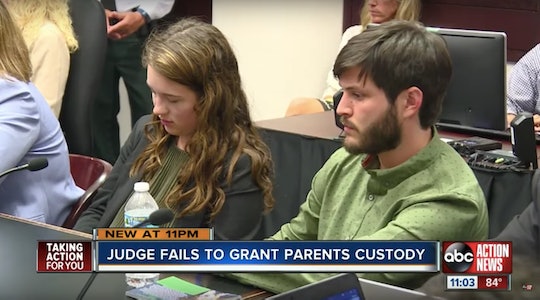 No parent ever wants to see their child sick, and choosing the best course of action can be complicated. But sometimes authorities are called in to determine what is best for the child, even when it goes against parents' wishes. Such was the case in Tampa, Florida when two parents were denied custody of their 4-year-old son with cancer after choosing to cease his chemotherapy treatments in favor of homeopathic remedies.

The story of Noah McAdam's medical and legal journey has made headlines for much of this year. Back in May, as BuzzFeed News reported, the then 3-year-old was removed from his parents' custody after his mom, Taylor Bland-Ball, and dad, Joshua McAdams, took Noah out of the state, skipping a chemotherapy appointment in favor of a consultation with an alternative medicine practitioner in Cincinnati, Ohio. At the time, Bland-Ball told ABC News that Noah had struggled with chemotherapy, saying her son "had vicious mood swings making him violent, making him very emotional. He also started to lose his hair right away after the first treatment... This is not about whether we're choosing alternative therapies — natural therapies. This is about...our rights as parents to seek other options."

Following the missed appointment in May, a multi-state police investigation and search for the family ensued, the Tampa Bay Times reported, making headlines and raising questions about parents' rights to determine medical care for their child.

The legal battle is still ongoing. On Monday morning, Hillsborough County Unified Family Court Judge Thomas Palermo denied Bland-Ball and McAdams' bid to regain custody, according to CNN. Noah is to remain a dependent of the state and in the care of his maternal grandmother, attorney to Bland-Ball and McAdams, explained, as the New York Post reported.

At the court hearing on Monday, Sept. 9, Judge Palermo cited evidence against the parents, including a case of domestic violence from 2016 wherein McAdams allegedly threw a plastic bucket at Bland-Ball and inadvertently hit Noah in the face, according to The Tampa Times. Additionally, Palermo described McAdams as "an untimely threat to them because of his anger issues," ABC Action News reported. Judge Palermo also said that both parents were aware that the police were looking for them and intentionally "abandoned" their phones and vehicle as they made their trip to Kentucky, the news outlet explained.

At the hearing, the judge also said he worried that Noah would face “substantial risk of imminent neglect,” according to NBC News. Remaining with his grandparents "is the only way to ensure Noah’s health, safety and well-being," Palermo said, NBC News reported.

Along with past incidents of violence and awareness of wrongdoing, Palermo cited another piece of evidence against Noah's parents: the boy's PICC line, a thin, soft, long catheter that is inserted into a vein for longterm IVs. PICC lines can be very dangerous to remove without experience, and Bland-Ball admitted to taking Noah's out herself.

"[Bland-Ball] testified that she had no training on how to remove the PICC line. She explained during the trial that she was still comfortable removing it because she watched a YouTube video on how to do it," Judge Palermo said in court, according to ABC Action News. "She simply pulled the PICC line out of her son's body." Along with denying them custody, Palermo also recommended that Bland-Ball and McAdams receive mental health evaluations.

While in his grandparents' custody, Noah will continue receiving chemotherapy on a regular basis, along with CBD oil treatments — the latter being something his parents advocated for, according to the New York Post. Bland-Ball and McAdams wanted to opt for dietary changes, alkaline water, and other homeopathic treatments after their son suffered from adverse reactions to the chemo sessions, the New York Post reported.