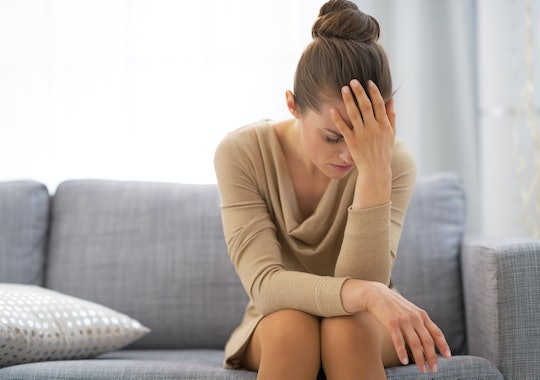 I have something to confess: I have no idea what I am doing as a mom. There are so many rules on how to best parent, and I feel like I am not following any of them. After all, as I work, my 2-year-old son is watching Go, Diego, Go while eating an orange and running around the living room. And I know some handbook out there says screen time for toddlers is a no-no, which would make me the worst mom ever. Of course, I feel guilty as a parent for the decisions I make. Turns out, that's a pretty common emotion among parents, according to new research.

According to Yahoo! News, a new study commissioned by frozen snack brand Farm Rich discovered that parents feel guilty at least 23 times a week because of their parenting choices. (Twenty-three times a week seems like a pretty low estimate, in my opinion, but I won't argue with the survey results.) The study also found that 25 percent of the 2,000 parents surveyed often second-guess their decisions as they deal with the pressure to be "perfect" parents.

Get this, though: When it comes to screen time, moms are more than twice as likely to feel guilty about allowing their kids to use electronics. They are also more likely to feel bad about nagging their kids over chores and not whipping up enough home-cooked meals, Yahoo! News reported.

As part of the study, researchers were also able to put together a top 10 list of guilt-inducing issues. According to Working Mother, the top three reasons parents cited for feeling guilty are a loss of temper, not playing enough with their kids, and not being at home enough. (I'll admit that two of the three apply to me.) Too much screen time ranked fourth on the list, while not enough home-cooked dishes came in seventh.

It's ridiculous, really, that parents get judged so often for their choices. And it's ridiculous that parents feel guilty for what they know is right for their family. For all the parenting studies out there, it would be interesting to see how other people's judgments are actually hurting our kids.