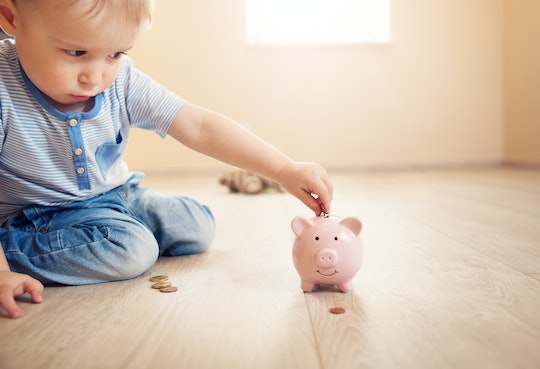 Parents Spend A Whopping $41 Billion On Their Kids' Allowances Each Year, Survey Says

Growing up, my "allowance" was primarily limited to the change that I managed to dig out of my living room sofa. I can't remember any of my friends really having spending money from their parents either, so I always assumed that was the norm. But apparently, kids get a lot more cash that I ever realized. In face, according to a recent survey, American parents fork over $41 billion on their kids' allowances each year. These kids are receiving almost $20 a week, a far cry from my chump change, indeed.

The survey was conducted by Finder.com and involved 2,000 parents. From the study's results, researchers determined that parents in the United States give their children a combined $41 billion in allowance every year. What's more, only 53 percent of parents give their children an allowance at all, meaning that all that money is coming from roughly half of the parents involved in the survey.

With such high payouts, one would imagine that these kids must be putting in serious work around the house. And while 86 percent parents do require their children to earn the money, 14 percent do not, Babble reported. However, making allowances chore-based may be the way to go. Pamela Yellen, a financial investigator and author of The Bank on Yourself Revolution: Fire Your Banker, Bypass Wall Street, and Take Control of Your Own Financial Future told Moneyish that earning money for chores is good for kids in two ways:

Allowances are a great idea, as long as they are tied into chores. The earlier children learn basic financial principles, such as the exchange of goods and services for money, the better. And nothing builds a child’s self-esteem faster than self-reliance.

But all chores may not merit financial rewards. Beth Kobliner, author of the book Make Your Kid a Money Genius (Even If You’re Not) told TIME that only extra efforts should be rewarded. It is important for children to understand that simply being a member of the family requires effort, such as keeping their rooms tidy or helping to clean up after dinner. Instead, consider giving them a reward for doing odd jobs and going above and beyond the household norm, as Kobliner suggested, according to TIME. Because, as Bill Dwight, founder and CEO of online family banking service FamZoo told TIME, "This instills the critical linkage between work and money."

Moneyish experts also provided recommendations for when to introduce children to an allowance. Waiting until they are around 4 or 5 years old is best, so that they can begin to understand the concept of money.

A large allowance isn't necessarily right for every family. But rather than worry about exactly how much money you should give your child, mom of two and the author of Smart Mom, Rich Mom Kimberly Palmer told Moneyish that parents should focus on making allowance a learning experience:

The whole point is to get them used to handling and talking about money so it’s not so much the amount as the conversation around it — how they can save or spend it.

Financial decisions differ from family to family and allowances for kids may not always be in the budget, or a decision some parents choose to make. But if you do decide to make weekly allowances a part of your parenting, make them count — a collective $41 billion is nothing to scoff at.

More Like This
Fun Ways To Celebrate National School Nurse Day
From Captions To Gifts, These Are All The Kindergarten Graduation Ideas You Need
New Study Finds Moms Who Earn More Than Their Husbands Also Do More Housework
First Look: The New Jujube x Lilo & Stich Collaboration