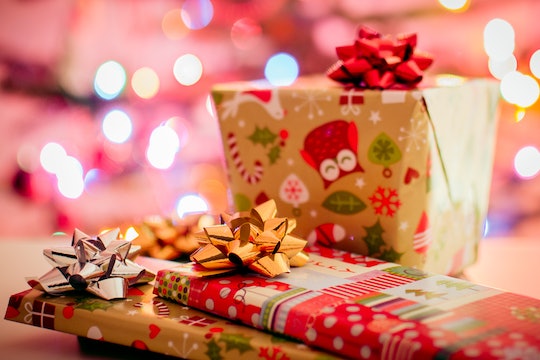 Parents' Holiday Spending Could Leave Them In Debt For Months, According To A New Survey

The holiday season is supposed to be the most wonderful time of the year. But the many different transactions parents make throughout the holiday season on expenses such as presents can put undue financial burden on them — turning it from the hap-happiest season of all to an all around headache. According to a new survey, parents' holiday spending could even leave them in debt for months afterward.

The new survey, conducted by global investment firm T. Rowe Price, took a sample of 1,000 parents with kids ages 8 to 14 years old and asked them questions about their holiday spending. The results were a little less than shocking — parents all across the nation are going over their budgets during the holidays, buying their children what they might want but not what the parents can necessarily afford. Because in the happiest season of all, we've been told that it is "better to give than to receive."

While that is true, this phrase follows parents to the mall in their holiday shopping and can seriously hurt parents who want to give their children everything. According to the survey, 53 percent of parents agree that they "try to get everything on my kid's lists, no matter how much it costs." Just how bad is this philosophy hurting parents? More than half of the parents surveyed use credit cards to fund their holiday spending and a majority of them pay them off in three months. A minority of parents take longer than six months to pay off those same credit card bills.

It gets even scarier. According to the survey, 25 percent of parents will pull from personal finance funds — such as emergency funds, their retirement account, or pay day loans — to pay for presents and their holiday spending. This is because parents are spending, on average according to the survey, $422 solely on their children during the holidays. But can you blame parents for going into a little debt? The prices for presents on the Toys R' Us' 2016 hot toy list are not cheap. A My Dream Puppy will cost parents $50 and a toy drone that shoots video will set parents back $129. Amazon's top 100 toys for 2016 are a little more reasonable — but it is still easy to see how parents can get caught up in all that spending.

It's important to note that the $422 figure only applies to these parents' children and does not include significant others, family members, and other people for whom parents might typically purchase gifts. According to a 2015 Gallup Poll, adults in the United States were planning to spend on average $830 during the 2015 holiday season overall — which is more money than any year prior. "It's OK to splurge a little bit on holiday spending," Marty Allenbaugh, a certified financial planner at T. Rowe Price told CNN. "There's a little pressure to do that, but we don't want [people] to go overboard at the expense of their financial well being."

There is a bright side. Millennials are more likely to save for the holidays throughout the year — more specifically, 83 percent of them. But they are also least likely to stick to a budget, which, if they're not careful, could put them in the exact same spot as other parents. With a little over a month left until Christmas, now is the most important time for families everywhere to save as much money as they can and refer to a strict budget for presents — that way they won't be paying off credit card bills well into the new year.